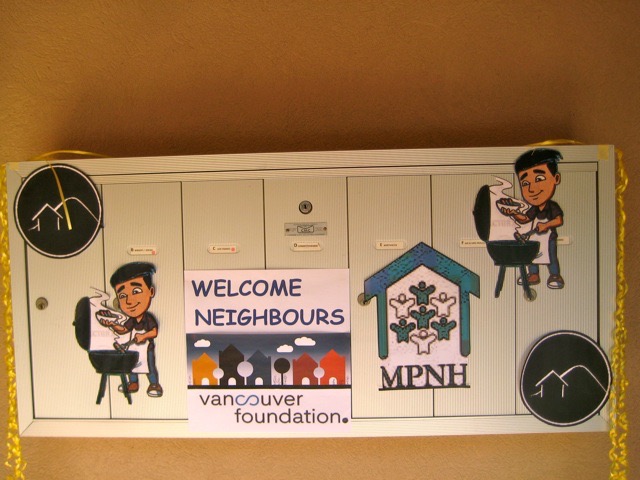 For the past 32 years, my husband and I have lived in a condominium complex in the 1200 block of West 7th Avenue in Vancouver’s Fairview Slopes neighbourhood. Local residents are a mixture of urban professionals, students, young families, a few children, and retired or semi-retired seniors. Almost everyone lives in apartments or condominiums. We have no local community centre or neighbourhood house, and opportunities for social interactions with neighbours have always been limited.

In 2015, in collaboration with the presidents of two other stratas, we applied for and received our first Neighbourhood Small Grant, which enabled us to host a courtyard party for residents in our three stratas. The aim was to bring neighbours together for the first time to participate in a Barbecue / Pot Luck, get to know one another, and begin the process of developing a friendlier, happier, more socially active community.

One immediate change for us was the development of a closer relationship among the five members of the organizing committee because we were now working together towards a common goal. We also realized that we shared similar values and interests. The courtyard party was a great success, with about seventeen participants, ranging in age from six to eighty-six, and representing several different cultures and countries of origin.

In 2016 we applied for a second grant so that we could slowly expand and invite other neighbours to attend our one-day event. Although we invited another condo group and had hoped for twenty-five participants, no one from the new group came but we nonetheless ended up with a group of twenty. In addition to residents from our three stratas, a neighbour, living in one of the few houses on our street, attended, as did one person from the Vancouver Chamber Choir that has an office in a near-by Heritage House. The neighbour from the residential house has lived here since 1972 and this was the first time she had ever been invited to a neighbourhood event!

This year, in 2017, we were delighted to receive another Neighbourhood Small Grant so that we could extend invitations to a different group of neighbours who readily accepted. As in previous years, the Barbecue/Potluck took place in our courtyard on a Sunday in July from 5:00 to 9:00 p.m. Our numbers jumped to thirty-four participants, ranging in age from a one-year old baby to an eighty-seven year old grandmother. For the first time ever, several young adults in their early twenties participated.

At the beginning of each Fairview Neighbourhood Gathering, we post a “loose agenda” so that those arriving at different times can easily join in the fun. We start with an icebreaker game, such as “Find Someone Who…” or “Famous People” that we try to base on information specific to each participant. This seems to be a really good way to get to know someone new, learn more about someone we already know, and have a good laugh.

The fact that we provide a pleasant, open setting, along with tables, chairs, dishes, glasses, utensils, and a barbecue makes it easier for the group to come together to share a meal, or for some to just come by for a quick drink and introductions. Everyone seems to enjoy the food, conversation and opportunity to make new friends and acquaintances and the group continues to represent a wide range of ages and cultural backgrounds, including immigrant families, a few children, working and retired professionals, newcomers, long-term residents, seniors, and people mobility issues.

Over the past three years, we have noticed that neighbours who were previously strangers, including ourselves, are now stopping to chat on the street or in the back lane. If a neighbourhood issue arises, we now feel confident that we would be able to call on our new friends for advice or assistance.

The atmosphere in our area is certainly more positive than in the past. We feel that we are well on our way to achieving our long-term goal of developing a safer, friendlier, more inclusive community.

We would like to thank the Vancouver Foundation, as well as the coordinators from the Mt. Pleasant and Little Mountain Neighbourhood Houses for your ongoing support over the past three years and we look forward to continuing this successful collaboration in future years.