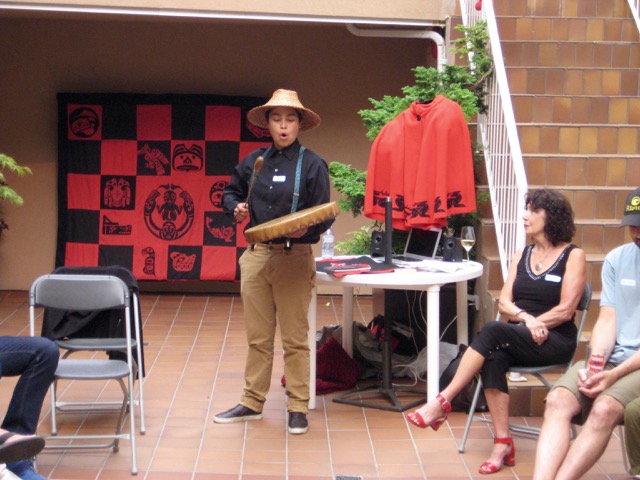 On Sunday, August 19, 2018, our organizing committee hosted the Fairview Neighbourhood Gathering IV, which had an Indigenous theme this year, as opposed to previous years when our focus was primarily on getting to know new neighbours and keeping contact with those who had attended the previous gatherings.
The beautiful artistic hanging that decorated our space was a gift to me from the Elder and grade 7 students at my last VSB school, Grandview/?uuqinak’uuh, as was the red cape that we hung on a tree. We also added two bouquets of red and black helium filled balloons.
With assistance from the youth worker at Kiwassa Neighbourhood House, we were able to find a young Indigenous drummer from the Musqueam Nation, Felecia Stogen, who did a wonderful traditional opening! She impressed the group by drumming and singing two songs in her native language, thereby setting a very positive tone for the event.
The 33 neighbours who attended the event ranged in age from a 3 week-old baby to a 95 year-old grandmother, and represented a number of different world cultures and ethnicities. Each of our gatherings has always been inclusive of people of all backgrounds and thanks to the generous grant from the Vancouver Foundation attendees never have to pay anything. We do ask that each family bring a side dish to share, their favourite drinks, and something to barbecue if they so wish.
This year we were particularly pleased to have fresh bannock from a Bannock Truck whose owner, Paul Natrall at paulnatrall@mrbannock.com had recently started up this business with support from Van City. His is the first Indigenous Food Truck in our area and his bannock is delicious!
Our local federal Member of Parliament, the Honourable Jody Wilson-Raybould, who is also Minister of Justice and Attorney General, sent a lovely letter of support via her constituency office assistant, Mr. Bernard Higham.
To encourage interactions among participants, we played an ice breaker game, “Test your knowledge of Indigenous facts,” and had some great conversation on relevant issues. Feedback from this activity indicated that members of the group were very pleased to have been given the opportunity to discuss current issues of significant societal importance.
The remainder of the evening was spent feasting on bannock, Indian salmon, barbecued salmon, blueberry pie, and many other delightful dishes!