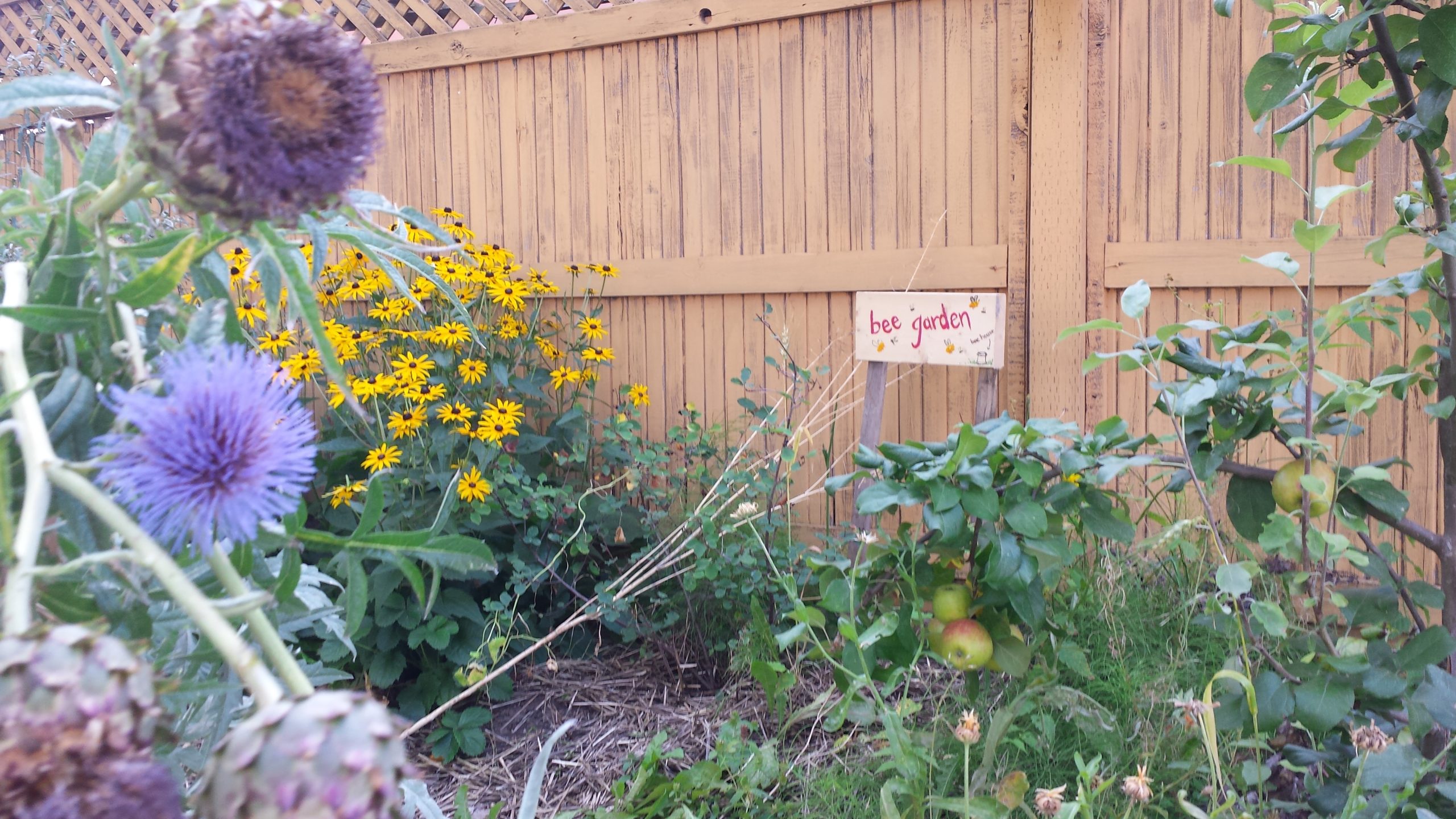 2016 marked the second growing season of the Food and Medicine Patch, a little boulevard garden promoting biodiversity, permaculture, native plants, and native pollinators. Our intention is to grow accessible and appropriate food for passers by in the neighbourhood. For this reason, we wanted to grow food and medicine recognizable by the communities living in the neighbourhood, being predominantly of Indigenous, Chinese, Japanese and Filipino descent. So we began to grow plants like salmonberry, salal, goji, seabuck thorn and Shiso. We also grew trees and shrubs like apple and blueberry, and installed support for pollinators, like bee baths and bumble bee nests. After the first season, we found what we were intending to do didn’t seem to completely reach the community. Rather than folks harvesting the fruitings of our garden, entire plants and bowls for the bee baths were stolen from the garden. We realized for the 2016 season, we would put more intention into communicating what and who the garden is for, and into sharing the educational benefits of biodiverse natural gardening through workshops.

This past summer, we asked folks we knew who spoke the languages reflected in our neighbourhood and asked them to translate signs for us. We got translators in Chinese, Japanese, Spanish, and French. We also asked several different people who speak Tagalog to translate, and ended up having some very interesting conversations. We asked about 7 people, and none of them could confidently remember the word for “bee”. A couple words did come up (“bubuyog” for example), but we didn’t feel confident the translation would make sense. So we decided to hold off on the Tagalog sign for next season.

At the end of July, we held a Sign Making and Bumblebee Nest making workshop in the garden. We talked about bumblebees and the struggles they have finding nests in the city due to fragmentation and more specifically, lawn mowing. We learned about the roles they play, the competition that exists with other popular introduced pollinators like the honeybee, and we learned how to make safe nests for bumblebees. Folks painted and colored their nests, and either left them in the Food and Medicine Patch, or brought them home to place somewhere else.

After making bumblebee nests, we made painted signs to describe the intentions of the garden to welcome folks in from the neighbourhood. This had an immediate impact. As we were painting the sign in Chinese (we asked translators to write out the stroke order along with each character so as to be more grammatically correct), a Cantonese speaking man who did not speak English saw the sign we were making and got off his bike. He seemed very happy about the sign so we showed him around the garden and shared saskatoon berries and currants with him. He then helped us finish painting the sign in Chinese, which was really great because what took him 30 seconds was taking us about 30 minutes! He rode off very happy, and we were equally so.

Currently, the garden hosts four bumblebee homes, one mason bee house, two bee baths and clay for mason bees to seal their tunnels with. Along with the aforementioned plants, we have also installed an edible mushroom patch in the garden, that began fruiting this summer! This mushroom’s mycelium is also food for bees and has mutually beneficial relationships with many common garden plants, as they exchange water and nutrients from deep within the soil for sugars produced through photosynthesis.

We look forward to the coming growing seasons to see the garden’s growth and changes!