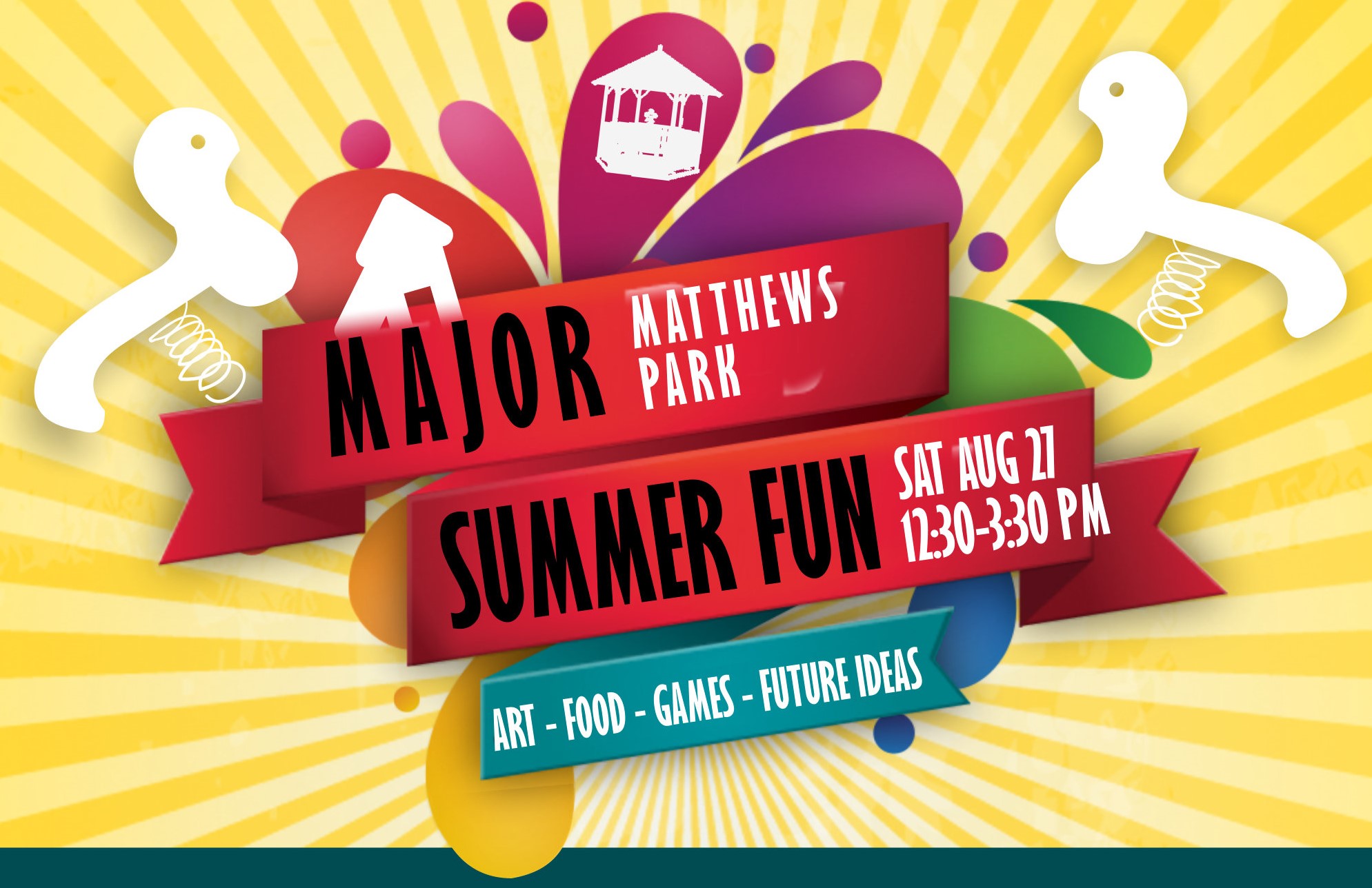 Major Matthews (Manitoba St., between W. 10th and W. 11th Avenue) is one of the smallest parks in Vancouver, but is well loved by toddlers to grandparents alike.

1. ABOUT THE EVENT
Flyers were distributed around the neighbourhood and posted on the park Facebook page to advertise the August 27, 2016 event. The main objectives of the event were to:
-Get neighbours together to connect and engage with each other.
-Generate new ideas for the future of the park
In total, some 70 people attended the event, with a maximum period around 2pm with about 40 people in the park at once (the park is some 300 square metres).

2. WHAT DID PEOPLE DO?
In addition to the playground and impromptu leaf throwing games for kids, there was a station with a volunteer face painter, arts and crafts as well as a place for little snacks people brought for the party. Several kids also had a lemonade stand that received donations which provided just over $40 for the BC Children’s Hospital Foundation.
The atmosphere was very casual and relaxed. A number of people who used to live in the area and moved elsewhere (e.g., Dunbar/North Vancouver) made a point to come back to see old friends from the neighbourhood.
Feedback from discussions with the Vancouver Parks Board was the need to have some data gathered on the desire of the community for several aspects of the park that need rehabilitation – a survey was launched at the event as well.
Park participants also helped rearrange/fix/clean some parts of the park, including a rubber mat under the playground with tiles that started to get displaced.

3. THE SURVEY
The event was used to launch a formal survey to help with the future of the park. The survey had about 18 questions to ask about opinions about the condition of various park elements (Gazebo, playground structure, playground rubber mat, seating) as well as suggestions for rehabilitation/improvement. The survey will be available online and will be available through the end of October to make sure a large variety of views are gathered.
4. THE BENCH
Part of the grant was to spend $150 for a new storage container for the park. In 2013, park users started to deposit several communal toys (e.g., tricycle, toddler picnic bench). Kids and toddlers loved playing with the toys. With many apartments in the neighbourhood, few people have the space to store toddler toys. In August 2015, based on one complaint from a neighbor, all toys were disposed of. Working with the parks superintendent, there was a process agreed to so that toys that remained under the slide would be ok, but it was up to the neighbourhood to keep the toys clean. While signage is up, there was the need for a proper receptacle; a parks bench was purchased and will be installed that has the ability to store loose toys.

4. FUTURE FOLLOW-UP
The event was a success and exceeded expectations for participants as well as organizers.

Most importantly, kids (predominantly aged 0-6) all had a great time!!

The survey results also helped people generate new ideas for changes to the park that will be presented to the Vancouver Parks Board. The bench will be a good legacy from the event and help people in the neighbourbood organize for more improvements to the future of Major Matthews Park.