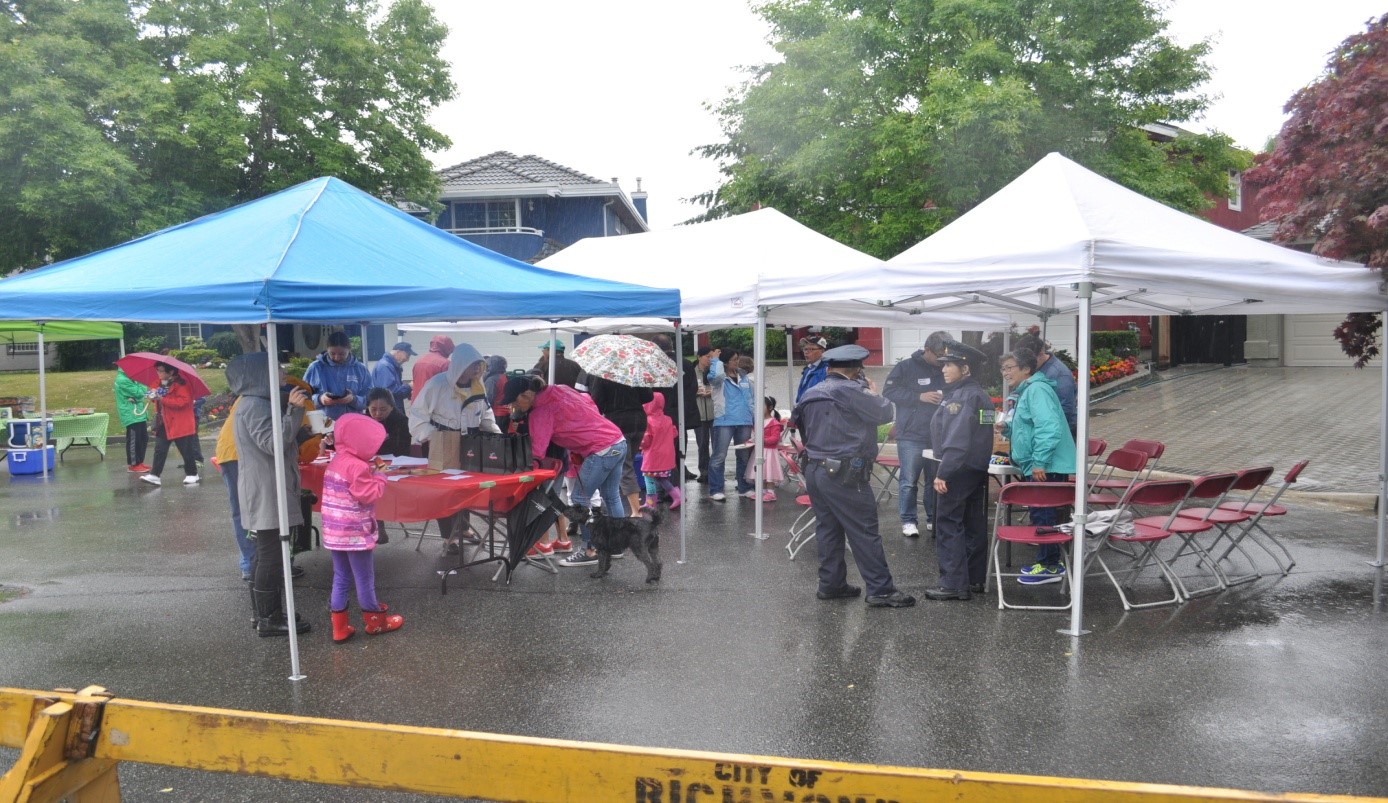 After months of planning the “Third Annual Neighbourhood Gathering” for Musgrave Crescent and Hankin Drive residents was ready except for one factor, the weather.  The morning of June 18, 2016 started with a drizzle and increased as the morning went on.
The organizers were initially apprehensive about response of the neighbours however it was decided to press on with the party. Hey, this is the “Wet Coast” and we should be able to cope with a little shower.

Facilities were in place by 11:00 and a crowd started to gather under umbrellas and canopies to meet old and new acquaintances and enjoy conversation, rumours and current events of the neighbourhood and our City.  Eventually about 80 showed up before the tents were folded, the BBQ turned off and the site cleaned up by 13:00.

The previous two gatherings were held in sunshine and although the crowds were larger, those that braved the rain were no less enthusiastic and there was strong support to continue the event next year.

The gathering would not have been a success without the support of a grant from the Neighbourhood Small Grants Program through the Vancouver Foundation and Richmond Cares, Richmond Gives which covered most of the basic costs.

The retailers of the Terra Nova neighbourhood really came through with their support.  The Manager of the local Save-On-Foods and his wife brought goodies and cooked hot dogs, Starbucks donated the coffee, Subway provided cookies and Bosley’s brought treats for the pets.  Prizes in the form of coupons and gift baskets from the MacArthur-Glenn mall were also given out. The new owners of the barber shop were welcomed to the party. One of the neighbours used his F350 to pickup and deliver the canopies, tables and chairs.  To make sure that everything was legal, The RCMP Auxiliary showed up with their Black and White, always a hit with the kids.

Communications are always critical to organizing an event of this sort and the organizers used e-mail to notify neighbours of the date and location of the party about a month prior to the date and followed it up with another e-mail a week ahead of time.  A flyer in both English and Mandarin was also distributed to all households five days before Saturday.  These notices were also used in the past and have contributed greatly to the success of the gathering.

We continue to see the results of the gathering on a daily basis as neighbours now wave or stop to talk as we go about our daily activities.