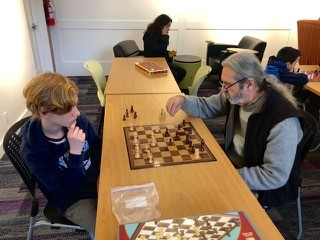 A fun idea became reality. My family members were not good enough anymore to beat me in chess, so I was looking for other opponents. That is how the idea of a chess club was born. A message on our Bowen Everything Else Facebook group showed me that a good number of people would be interested in this. Oh no, now we (my mom and myself) had to organize this!

An angel came by in the person of Jennifer Streckman, our interim library director, who took on the task of having a space ready and do the marketing on Facebook. Also, we could make it happen due to a Neighborhood Small Grant we got from the Bowen Island Community Foundation. Thanks so much!!

Chess Mates, as we called it, was a bi-weekly event (6 times in total) in the spring to play chess in an informal way with drinks and snacks. On average, 15 people of all ages (between 5-68) attended. One of the evenings, we had a Zoom training session from a chess professional out of Vancouver, who taught us some new strategies.

We finished the series with a tournament, which was so much fun. Noah, who came every evening, won this tournament but everyone who participated got a gift card from Phoenix Gifts, Books & Treasures. My opinion is that we should start this up again in the fall. Looking forward seeing the same and other new faces then.
{Post Image:11}