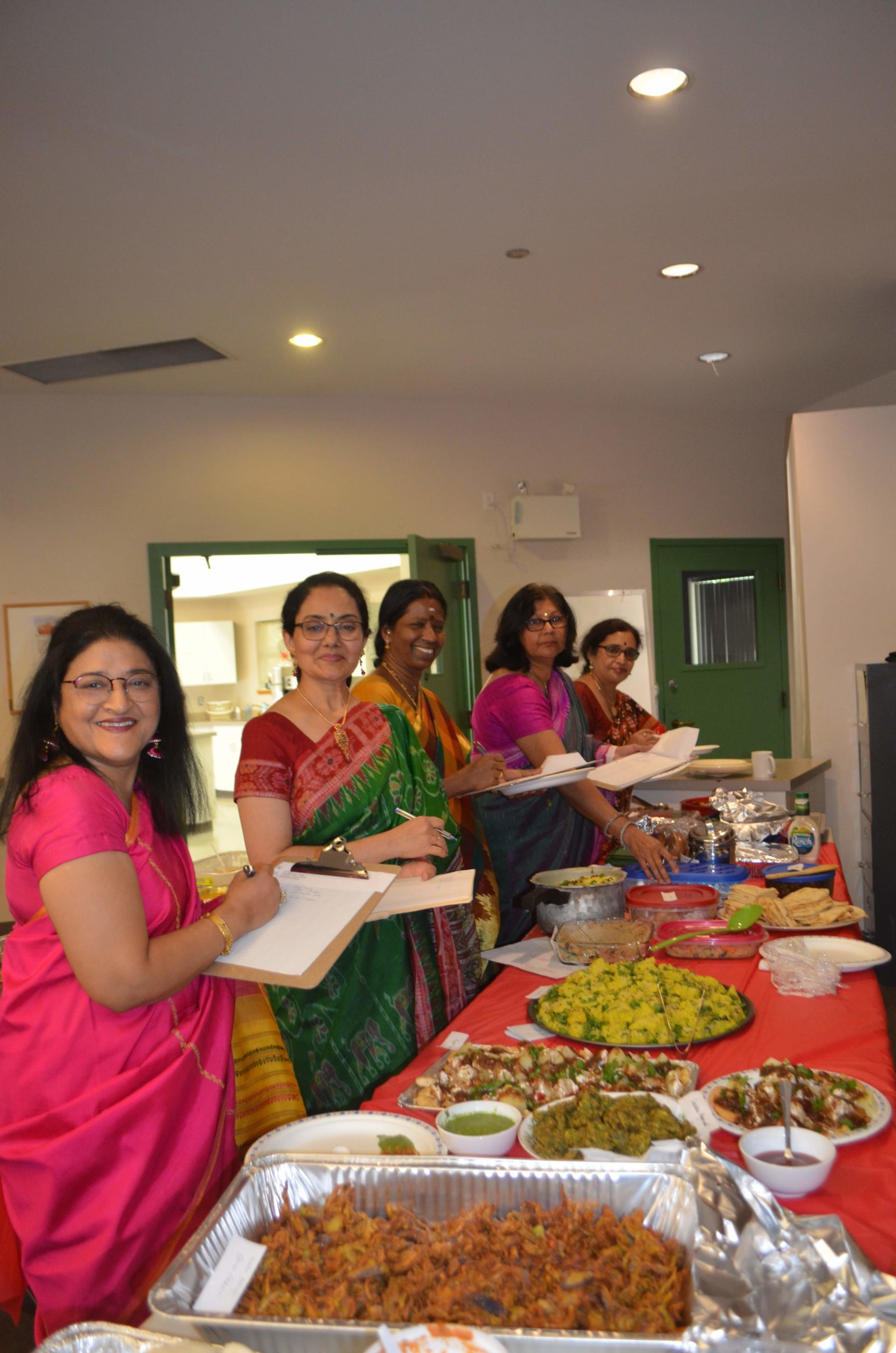 The project event “Housewives Potluck: Healthy Eating Vegetarian Cooking Contest” was conducted successfully on Sunday, 29th September, 2019 at Northwood United Church Hall, Surrey. Our event was attended by 70 immigrant women, from 2 PM – 7 PM. The grant applicant conducted several activities such as vegetarian potluck, festival themed colorful photo booth and cultural dance activities, as seen in the photographs.
Diverse multi-cultural women of color from the Surrey neighborhood, several of whom are new immigrants, attended this project event. The women were able to forge an instant bonding and connection over food potluck and cultural Indian dress. They felt a sense of excitement, belonging and purpose, as they enjoyed a shared neighborhood bonding experience. A direct outcome of this project is neighborhood engagement and building social ties.
This project impacted the community as the grant applicant was able to build partnerships with local businesses, local community halls such as church, local cultural organizations and local cultural ethnic dress groups within the Indian community. All attendees were also made aware of the local neighborhood resources such that they could find a platform to connect over the longer term.
Potluck items were judged by food judges on the basis of taste, adequate amount (enough for 15-20 people), unique-ness of dish prepared, and presentation style. Upon entry, at the registration desk, all items were labeled with name of dish and name of person preparing it. A scoring sheet was handed to five (5) judges based on these four parameters to arrive upon a unanimous decision. Not only did the judges award points for individual entry, but then spent more time to collate the results to arrive on a unanimous decision. The judges were immigrant women of color who are also well known in the local community for their respective professions and vocations. These five (5) judges were invited as guests to the event and were all given a gift / token of appreciation for their time spent at the event. This formal process of food judging was applauded by all participant women as it was seen by them as unbiased, friendly and extremely motivating.
The three top potluck food entries were announced towards the end of the event and were awarded prizes by the food judges. The grant applicant used personal funds and resources to procure gifts for both judges and participants, as the grant money was not sufficient to cover this cost. We hope that if we are considered for this grant next year, we be given the full amount such that we don’t have to incur considerable expense for the same.
A festival themed colorful photo booth was prepared by the grant applicant along with a small group of participants who are creatively inclined. Several phone calls and meetings were conducted within this “art group” to both visualize and design a colorful background to match with the attendees native dress. This was especially designed so that attendees could create, enjoy, savor and share memories from this event with their friends and family on their social media. This was useful to create a cultural identity of their own, especially as new immigrants assimilate within a new country. Usually cultural dress is only worn to temples or in private family get together, but never usually in public. This event encouraged the attendees to not only feel a sense of pride and ownership in their roots, but also feel comfortable wearing and owning their identity in public places. This cultural dress show called “Saree Fun” was appreciated by the attendees. They were also asked to engage in public speaking by describing their native dress and then have photo booth fun.
Several cultural dances were performed by the attendees at the event, this was key in creating a cultural identity especially as new immigrants assimilate within a new country. Music, speakers and mike was arranged by the grant applicant so that the cultural performances could be conducted seamlessly and be enjoyed by all.
The grant was instrumental in making this project successful and so popular within the ethnic womens’ community.