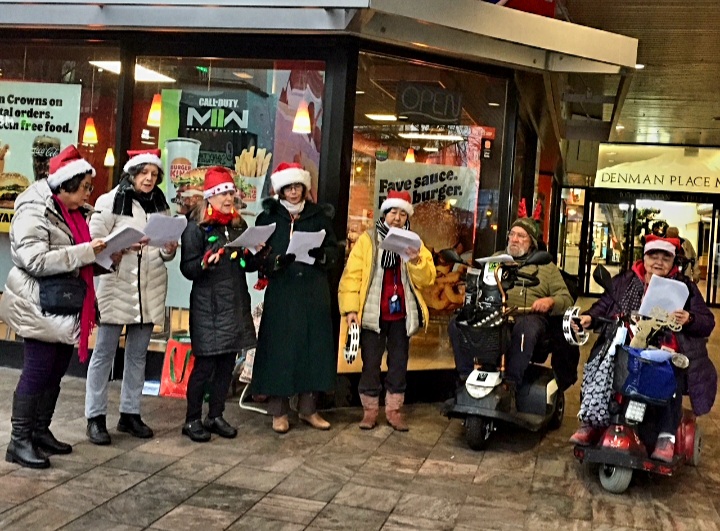 My first priority was choosing popular Christmas carols so with the help of friends and internet searches, I had a list of 30. After much copying and pasting, the song sheets given to each singer had 9 pages and all songs were numbered for easier access.

Next priority was advertising so I put notices up on community billboards, a seniors’ center, Gordon Neighbourhood House and my own building. I was pleased that I got responses from all of these venues. After much deliberation, I put my name and home phone number on the flyer so people could contact me if they had questions. Each time someone called me I stressed that enthusiasm was the most important aspect rather than vocal ability as this was basically a pop-up choir and there were no rehearsals. People loved the idea and were enthusiastic. Fortunately, a true musician named Dave did volunteer to bring his drum and that did help us keep a rhythm.

My final priority was to make it fun for everyone involved so I purchased Santa hats, reindeer headbands, jingle bell bracelets, light-up glow sticks and candy canes. Jenn Mason from Gordon Neighbourhood House also loaned us a few shakers and a tambourine.

I was pleased that we got such a positive response from passersby and we managed to coax a few new people to join us each of the two times we went out. I got thank yours from people who participated and I truly feel a good time was had by all, but what really warmed my heart was the obvious glee we brought out in a number of small children who were just passing by with their families. One little girl convinced her Mom to come back twice on the same day and also showed up the next week to see us. Now that is what I call the true spirit of Christmas!