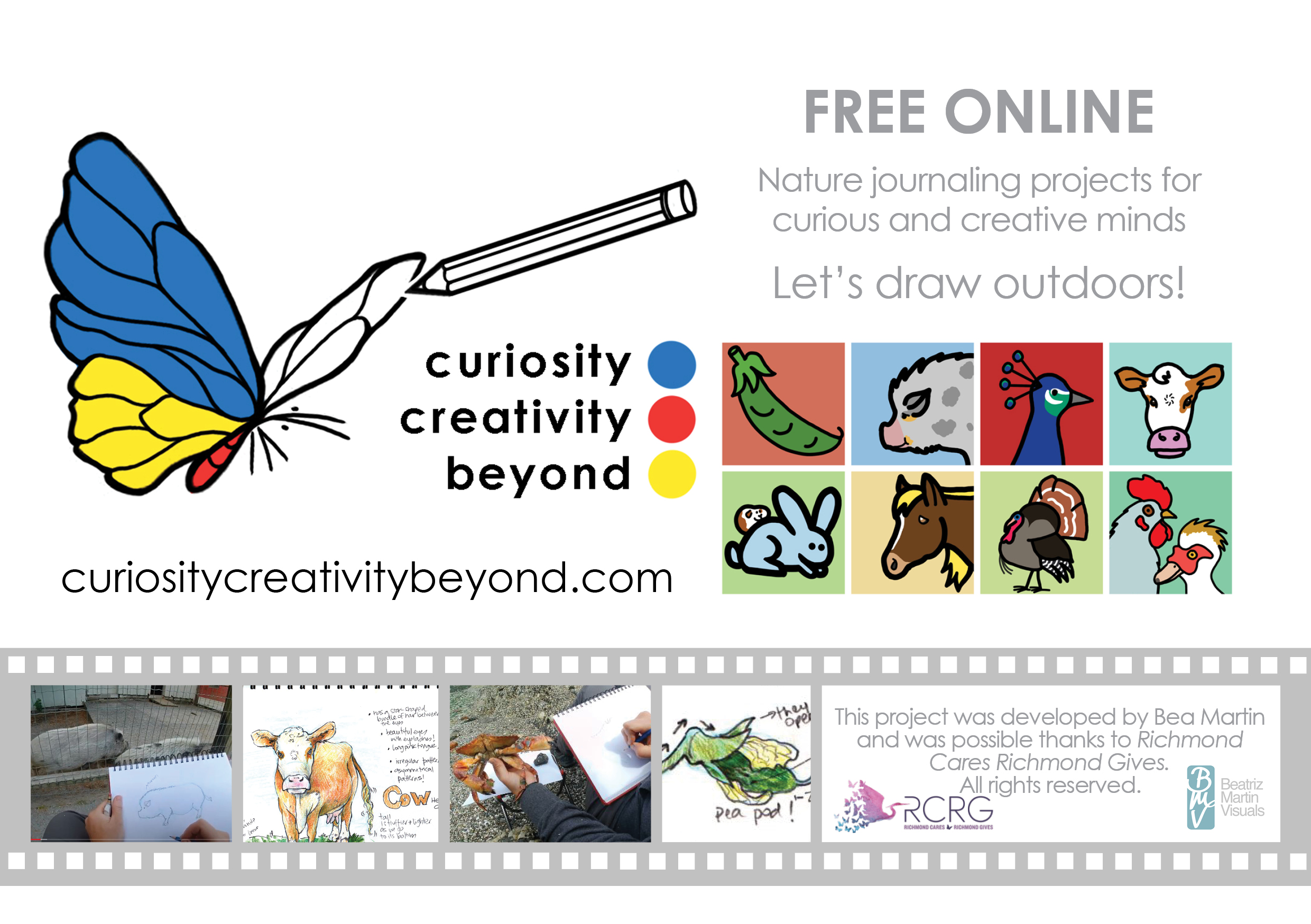 Curiosity, Creativity and Beyond… Drawing outdoors!

My second Neighbourhood Small Grant continued the project Curiosity, Creative, and Beyond, a website designed for curious and creative kids, that contains easy how-to-draw animals and nature videos that kids (together with parents/guardians or on their own) can follow from the safety of their homes. This time around, I decided to go outside and film the drawing process while on location, following public health guidelines.
I purchased an action camera that I mounted on a tripod. As counterweight I used a kitchen gloved with a potato inside! After a couple of tests, I went to my community garden to record the snow peapods. It would take 3 recording sessions to get started, because the first time I did not record sound and the second time the whole sketchbook was outside the frame. Luckily, the snow peas survived the heat wave, and I was finally able to record decent drawing footage before they finally ceased to be. Most videos were filmed at Maplewood Farm, whose awesome staff kindly allowed me to film before opening hours, to protect visitor’s privacy. The last video was totally unplanned, when I found an intact dead rock crab at the intertidal zone of Pender Island. An opportunity I could not miss! Although the goal of this second round was to make 8 more videos, I uploaded a total of 11… and I do not discard filming more drawing sessions at the community garden… who knew that artichokes flowers could be so interesting? To be continued, I guess.
Overall, filming my drawing process on location was at first quite challenging, but once I solved the logistics of where to place myself and the sketchbook, it went very smoothly. Animals (and peapods) were extremely cooperative and chasing the peacock around the farm with the tripod was quite fun. Also, filming on location provided with extraordinary opportunities to show how unpredictable animals are, the sounds they make and tricks to sketch them from real life. Editing the videos was faster this second time around, I had learned quite a lot on the first NSG round… although inevitably I ran into scratch disc memory issues and a couple of unexpected computer crashes.
One very important think in terms of branding, I designed a new logo that better reflected the mission of the website, redesigned the website for better navigation and created a newsletter on MailChimp to better communicate with my audience. And I printed and distributed 5×7 cards around community centers, public libraries, local art stores, etc. because I genuinely trust word of mouth and wish to stay away from social media.
I am very grateful to RCRG for their support, and I am looking forward to continuing filming more drawing sessions!
{Post Image:11}