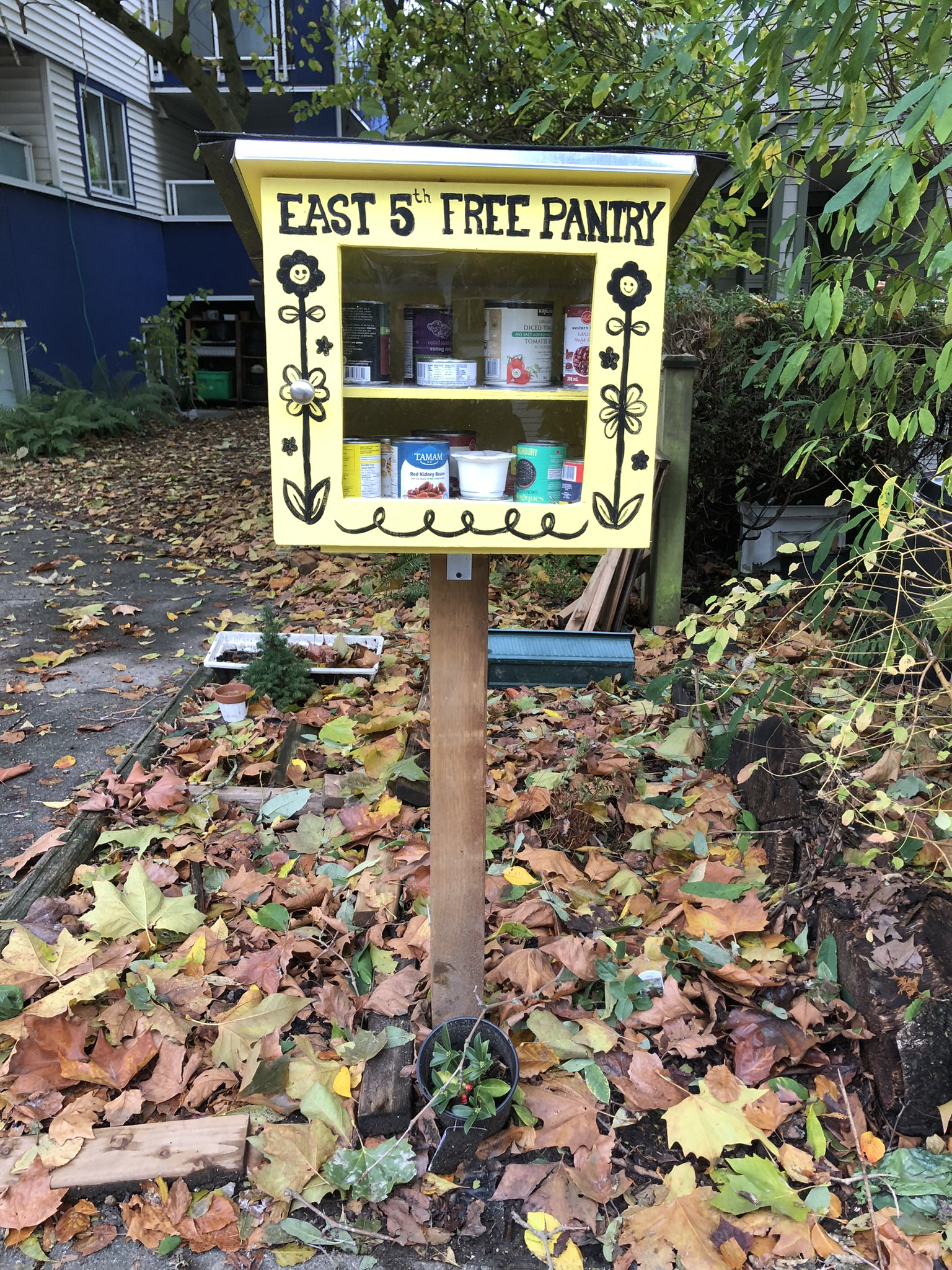 Inspired by my friend & neighbour’s back alley self-watering garden project and our family’s concern for our neighbours who might not have enough to eat, I applied for & was awarded a $500 grant to fund our community project to build, install, & maintain a little free pantry on our co-op’s property adjacent to the sidewalk.

A call for volunteers from our co-op, Rising Star, & two neighbouring buildings, Sunrise co-op next door, 1575 East 5th Ave Indigenous housing (VNHS) across the street. saw about eight people respond. We set a date for our planning meeting & we were on our way! Another few folks trickled in over the coming weeks. Our building crew: Amanda, Andrea, Ariel, Emil, Jason, Jamil, Jorge, Mairy, Marg (me), Mike L., Shae, Shannon, and Stephanie. Our maintenance crew continues to grow as word gets out!
At our initial meeting, we agreed on a little free pantry plan that looked easy to build and had the clearest instructions—none of us described ourselves as particularly handy! Amanda and I bought most of the stuff on the Materials list that week so that we could get started the following weekend. We asked the Lowe’s cut shop to make the plywood cuts to get the straightest, most accurate cuts–they did the all the cuts for free when they heard about our project!

There was one angle cut that the shop could not do so the next weekend, Jorge & I completed this cut (imperfectly) & put some of the pieces together–he did some serious gap filling because I made a messy cut. Over the course of the next few weeks, we met in our parkade workshop: Emil suggested a shelf to hold more food so I cut one and he and other folks sanded sanded everything. A few of us assembled the pieces, fixed mistakes as we went (our catchphrase: “We are learning so much!”), Amanda attached the plexiglass for the window, Stephanie and I painted (three coats!), I sealed (messily) for good weatherproofing, &, in a push to get finished before the weather turned, I attached the flashing and roofing (materials & detailed instructions generously donated and delivered by Darrell of Millwall Roofing). in one sunny afternoon, Amanda, Emil, Jamil, Jason, Jorge, and Mike L. dug the post hole and poured quick-drying cement to secure the 4” X 4” post. Next, Shannon, an Emily Carr student, painted the lettering and decorations on the front of the pantry. The decorated pantry box was attached to the post using a U-bracket and a couple of L-brackets & the East 5th Little Free Pantry was up and running! As soon as crew members first stocked it, non-perishable, sealed food started coming in & going out!

The final touch was attaching a sign (printed and donated by Brad from A to Z Banners) listing suggested donations on the side of the box.

Stephanie had the foresight to send an email soliciting food donations and opened a bank account for the pantry for monetary donations so that the maintenance crew could buy in bulk to keep the pantry stocked. A next step is an East 5th Little Free Pantry food drive for the same purpose.