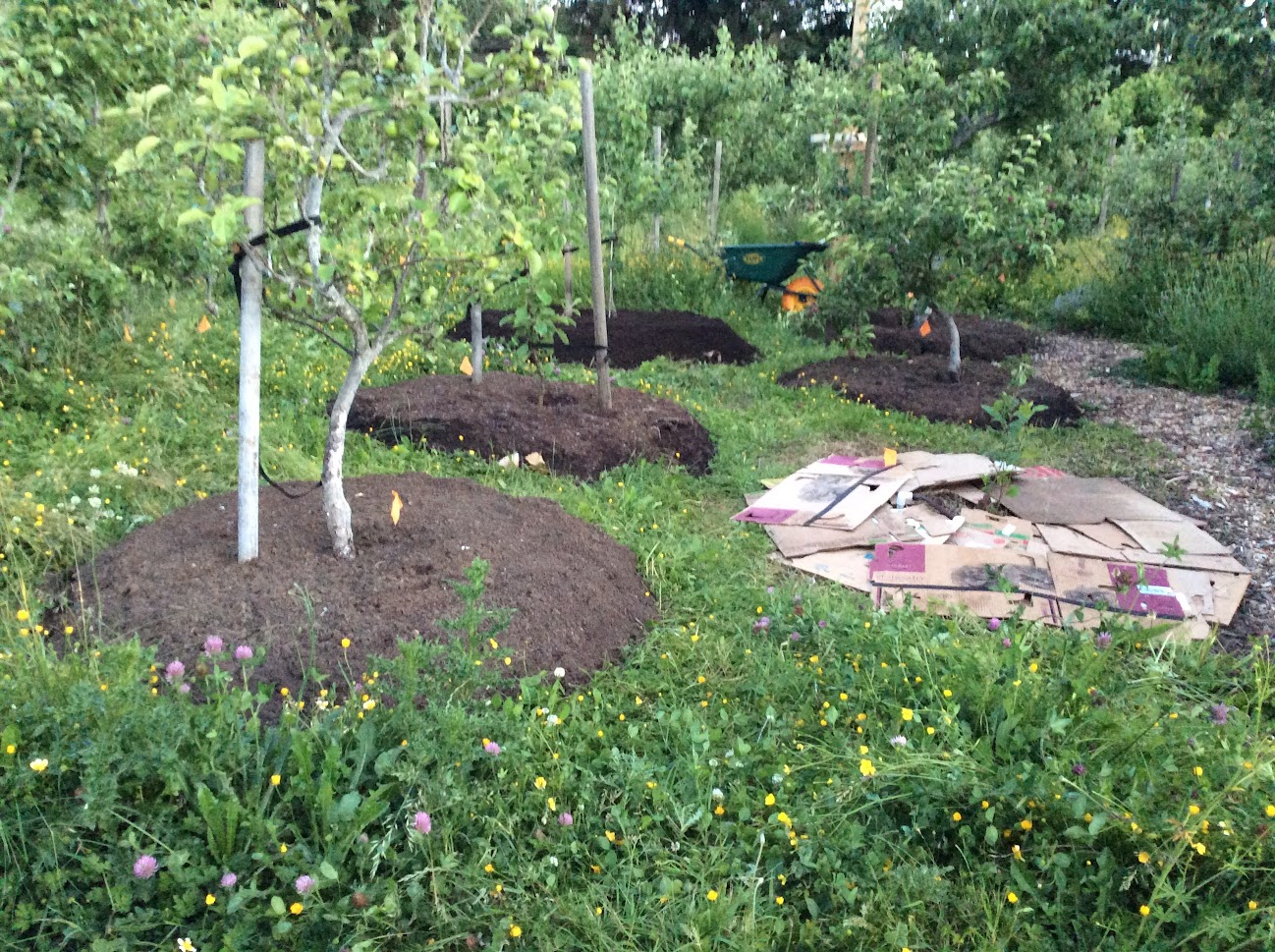 The expansion project at Copley Community Orchard (map) was made possible by the generous funding from Neighborhood Small Grants. My gratitude to Copley Board members for allowing the opportunity for me to create more guild gardens. I acknowledge that the land on which I work and grow is on the traditional, ancestral, and unceded territory of the Coast Salish Peoples, including the territories of the xʷməθkʷəy̓əm (Musqueam), Sḵwx̱wú7mesh (Squamish), and Sel̓íl̓witulh (Tsleil-Waututh) Nations. I was first inspired by Shannon Mendes, a landscape designer who introduced the fruit tree guilds at the 2019 workshop.

7 new guild garden beds were prepared at the west orchard last year. I planted garlic cloves and daffodil bulbs in the Fall (as weed suppressors) together with Janet and Rita. It was truly a sign of Spring when the yellow daffodils blooming amongst the garlic and apple blossoms.

It was a challenge finding native plants in the early part of the year. In mid-March, we received news from the Environmental Youth Alliance where native plants would be available. Shortly after, we also learned about the Coast Salish Nursery. The collection of native plants from both sources, and some seeds purchased gave us a good start. One challenge was determining plants that would be suitable to grow underneath semi-dwarf apple trees.

I saw a hummingbird hovering and getting nectar from red bee balm flowers. Hummers, Cabbage White butterflies, crows and cats were regular visitors to the guild gardens. There were also visitors who were curious about the new guilds. It was a surprise to discover the Garden Huckleberry loaded with berries in late autumn.

Periodically throughout the seasons, I took pictures to show stages of the guilds development. Seeds, flowers and leaves were frequently harvested. Wooden plant signs were made from scrap woods with the help of Norma and Janet to wood burn them. Janet also contacted the Northern Greenway Shop for some of their free woods offer to make plant signs and stakes. She was active in her research seeking Indigenous plant names, as well as seeking the right protocols to apply for future plant signs.

I was very fortunate to connect with Shannon Mendes in such a short time to facilitate the Guild Workshop held on November 8 – on the last orchard’s work party day. An overview of the fruit tree guild theories, plant species, ecological functions, edible and medicinal plants were taught. It was a very informative and educational workshop.
{Post Image:11}