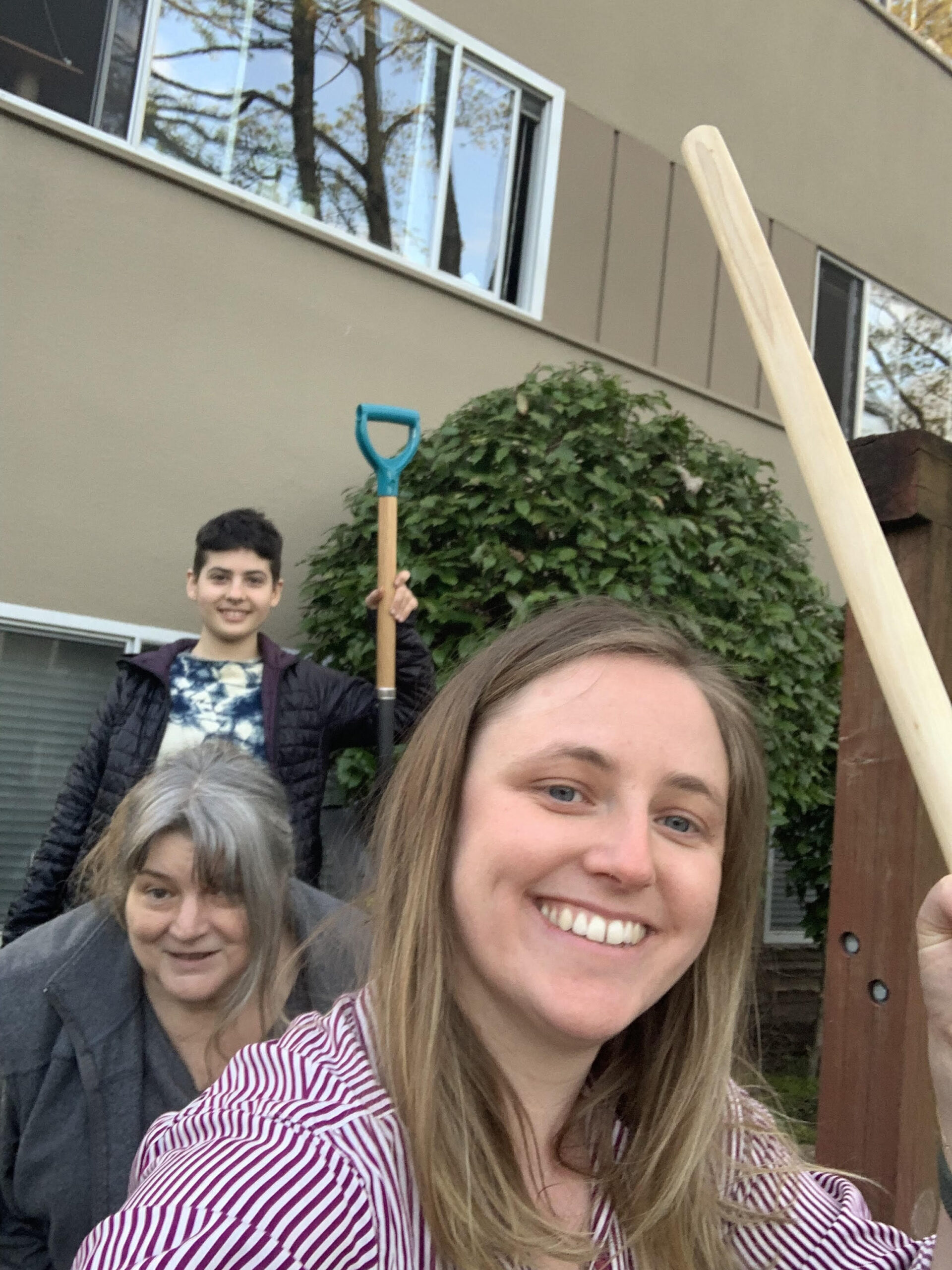 In preparation of Spring 2022, due to cold weather conditions, we’re off to a slow start.
Just yesterday I was discussing whether or not to start planting with another member
of our “Faircrest Farms” group, noting that it still felt cold; an hour later it began to “hail”!
Still we have seedlings started in the buildings laundry room, and the photo’s included
with this email show the garden community out and shoveling the compost and fertilizer
we had delivered into our garden beds. There’s lot’s of tilling and turning being done to
mix it together with the soil, unfortunately our garden tools were taken recently and so
we had to also pool together our resources to replace the tools before we could begin this
process. As well we used the grant to upgrade our hose reel, as the plastic one we’d been using
started spraying water from its joints. Also because the plastic is light in weightiness our hose reel tended to tip over frequently when pulling or rolling up the hose. The one we recently
purchased from Lee Valley, it is made from steel and so promises to secure better to the
hose and to be better equipped to stand in place without falling; we still have it in storage
as the group has concurred that a chain & lock is needed to avoid theft (as we’re all still
bruised from the loss of our tools). While putting it together I found it to be very heavy so we’re hopeful that it lives up to its brand’s promises and stays upright when pulling.
As well, we’ve procured a new hose to replace the leaking fabric one we bought last year.
The fabric hoses are fabulously light and flexible but lack in durability, this would be our second one to spring leaks.
Our new hose is of a professional grade, and was chosen by my brother who installs
sprinklers for a living, so again we’re hopeful that this one withstands the test of time.
We’ve done a great deal of research on hoses and hose reels, fertilizers & compost vs.
mixed soil; so much of the time goes into the planning and preparation of gardens before the results
even begin to bud. Still, in terms of bringing people together in our community, recently even while simply tilling the soil some little boys stopped where I was working to marvel over the many worms that were surfacing. I find that children are ever drawn to and fascinated by the gardens when we’re working in them, even the shyest of children want to stop for a closer work. Soon enough these two young boys (under the supervision of their parents of course) grabbed trowels, determined to “help” me; so much fun I wish I had pictures of that day!
As I write this today it’s once again begun to hail.
{Post Image:11}