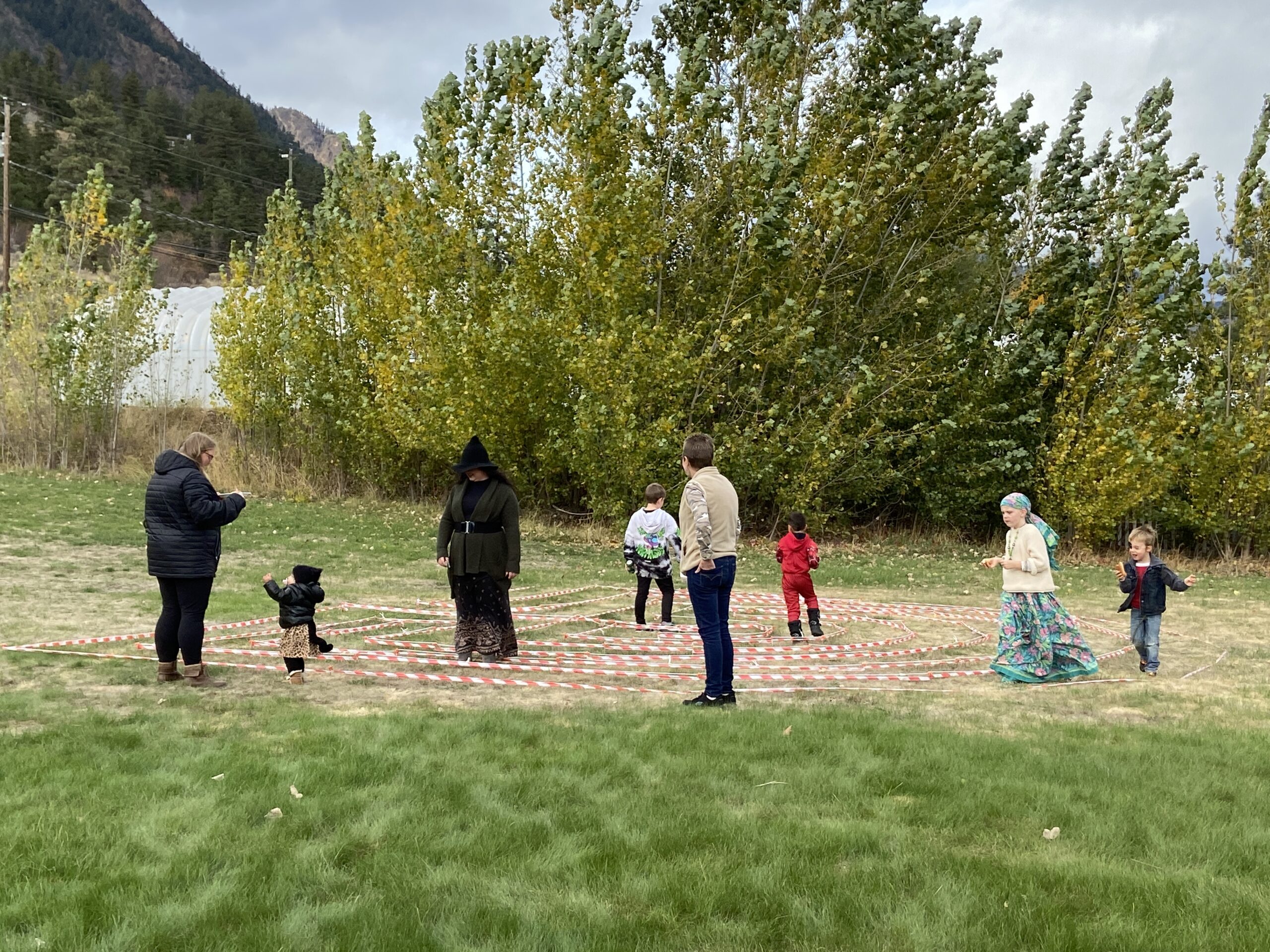 With the help of Neighbourhood Small Grants I was able to buy the materials to set up a temporary labyrinth at the Elks of Lillooet. I wanted the labyrinth to be temporary because one of the most time consuming aspects of labyrinths is having to weed them and keep them clear of grass and alfalfa so they are usable, so being able to take it down and mow the area makes the upkeep much easier. Also Lillooet has so many beautiful vistas that having the option to change location of the labyrinth as well as the style of the labyrinth is part of the longer-term plan. This first labyrinth at the Elks was also to introduce labyrinths to Lillooet in the hopes that community members would suggest other locations to install labyrinths all around Lillooet.

The steps I took to implement this labyrinth were as followed:
1. I first needed to get an idea of how much material I would need to create the labyrinth. I have a small labyrinth on my property so I got the help of my father to measure out the actual length of the lines of the labyrinth. This turned into a bit more of a confusing project than I had imagined so it was very helpful having his help as he is a mathematician. Once I had that length I was able to order the materials.
2. I was able to find some very good tent pegs on amazon that would hold the red caution tape I used to create the lines of the labyrinth that would be reusable. They were more expensive than I had originally thought so in the end I actually didn’t have quite enough of them and had to use some of my old bent tent pegs.
3. Once I got the material I had to wait until the area at the Elks of Lillooet was ready for my labyrinth. I used the Elks property because they have insurance for community events on their property already and have a large field that is unused most of the time. Unfortunately this year they had a trailer on the property burn down as well as some squatters living on the road to the Elks and I felt it was best to wait until these situations were resolved before setting up the labyrinth to be sure of the safety of community members using this meditative device.
4. I also purchased a book by a woman in Vancouver, BC who wrote the book on how to set up labyrinths in communities with permission of city councils etc as well as good descriptions for various uses of the labyrinths. It is really helpful: Walking the Labyrinth: Your path to peace and possibilites by Diana Ng.
5. Once I had the material I set up the labyrinth. This actually ended up taking me longer than I expected … about 2 days, but it was the first time I had done it so there were things I had to figure out. It came out quite nicely and immediately I had people coming by wondering what I was doing and quite curious about the project, who immediately wanted to try it out.
6. Once I had the labyrinth up I also wanted to create a sign board to help tell people how to use it so I created my own plywood sandwich board. I wanted to just use chalk on it so I could change and update the details if I changed the design of the labyrinth the next time I set it up, but immediately the rain washed off all of the chalk and so I had to consider some other options.
7. The Elks, once I had set it up and they finally understood what it was I was doing really loved it and they wanted to make it into a permanent fixture! They also wanted to host an event at the same time as introducing it to the community so we ended up hosting a Halloween BBQ where people came dressed up in Halloween outfits and had some yummy treats as well.

The event turned out much better than we had imagined. Because of Covid-19 the Elks hadn’t hosted an event in a couple of years and we weren’t sure if anyone would show up. Also we pulled it all together last minute and didn’t have a lot of time to advertise the event. But as the day went on more and more people kept coming so I think the word got out. People loved it so much!

I really wanted to have my sign board up explaining how to use the labyrinth before all the people came, but since it rained the night before my sign was washed clean and there was no instructions. This actually turned out to be much better. Each new group of people and kids came up with their own games to play on the labyrinth and it was so fun to watch the kids running around the lines or jumping over the lines and laughing and playing. It turned out much better than I had imagined everyone had a wonderful time.
{Post Image:11}