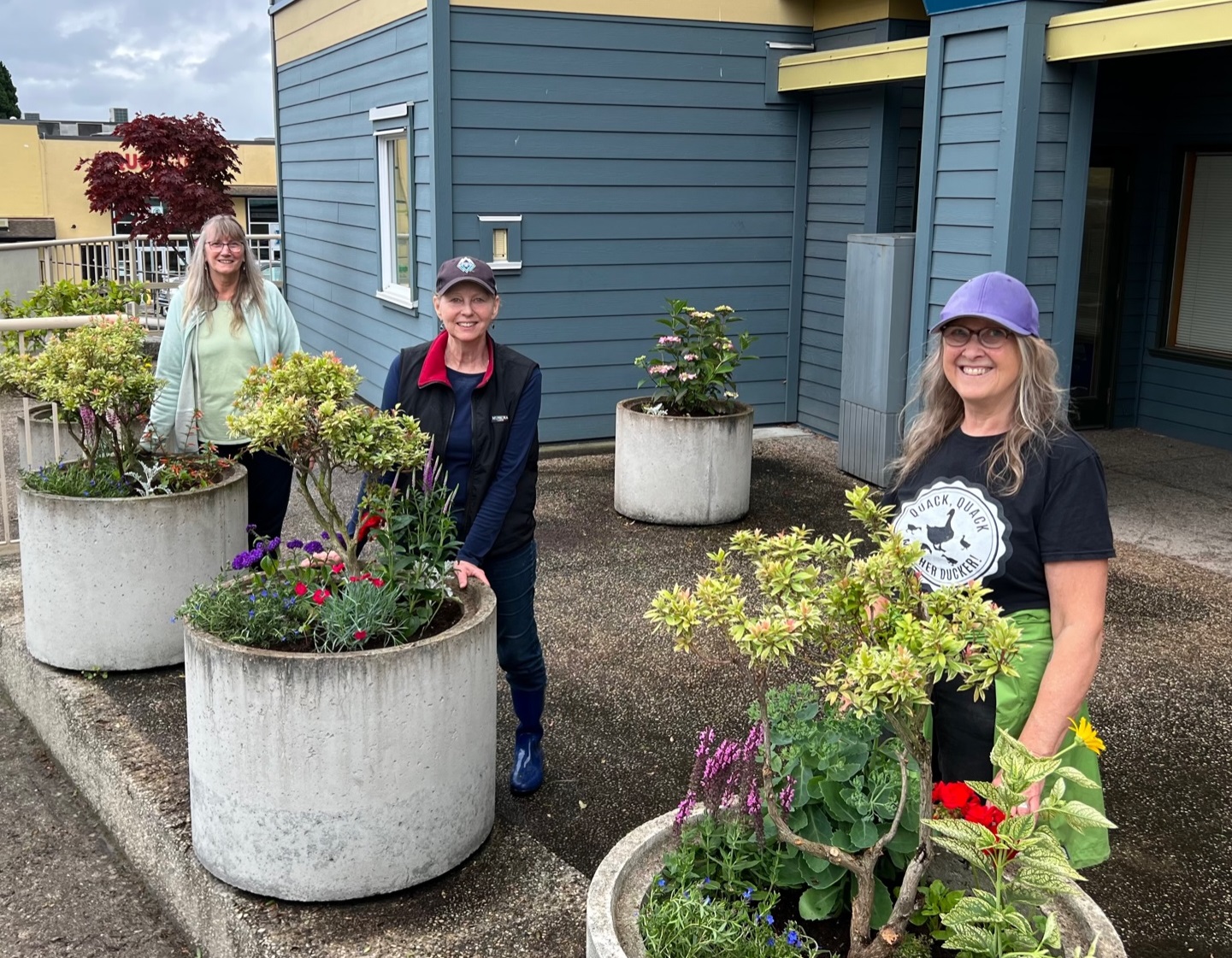 Make Powell River Bloom was formed in response to the Canadian Council of Garden Clubs’ proclamation of 2022 as National Year of the Garden and its challenge to garden clubs across the country to become involved. We met the challenge by seeing what we could do to help make Marine Ave more welcoming. To be honest, we felt our downtown did not compare well to other small communities in BC. In addition we thought cheerful flowers would lift spirits following Covid and the closure of the mill.
With sponsorship by quathet Living, support from Springtime and Mother Nature garden centres, a Neighbourhood Grant, funds from Powell River Garden Club and individual members, we pitched a plan which we presented to every business on Marine Ave and invited them to participate. To encourage store owners to plant flowers and beautify our City’s main stroll, we offered advice, plants, soil, containers, as well as our own labour to weed, fertilize and refurbish dried up planters. We had the blessing of the Parks Department and were careful not to encroach on City property.

Twenty four businesses signed up. Store owners were enthusiastic, many going above and beyond our vision. A contest to win a cool garden gnome got more folks involved. The gnome spent time in each business and customers took selfies with him that were submitted into a draw. The SD47 Henderson school’s Landed Learning students chose its name, Gnomeo. They had their picture taken with Gnomeo when he visited their pollinators’ garden, a Year of the Garden initiative. The students transformed a donated canoe into a garden, the Garden Club donated the plants and Make Powell River Bloom provided the commemorative sign.

Fear of vandalism was a concern expressed by some businesses. Happily, there were no reports of vandalism. We feel that with the new Clock Park at Alberni and Marine, flowers and plants along Marine are becoming more commonplace. Downtown is undergoing a revitalisation that we believe is building momentum.

Now that we completed our first season and have proven revitalising downtown can be done, we will apply for larger grants that will further our success next year. We plan to work collaboratively with the Pollinator group who have done such beautiful work with their plots. With the revitalisation of Marine Ave now being spearheaded by the City, we hope to work more closely with the Planning department next year. And we invite volunteers to join us in making Powell River bloom.
{Post Image:11}