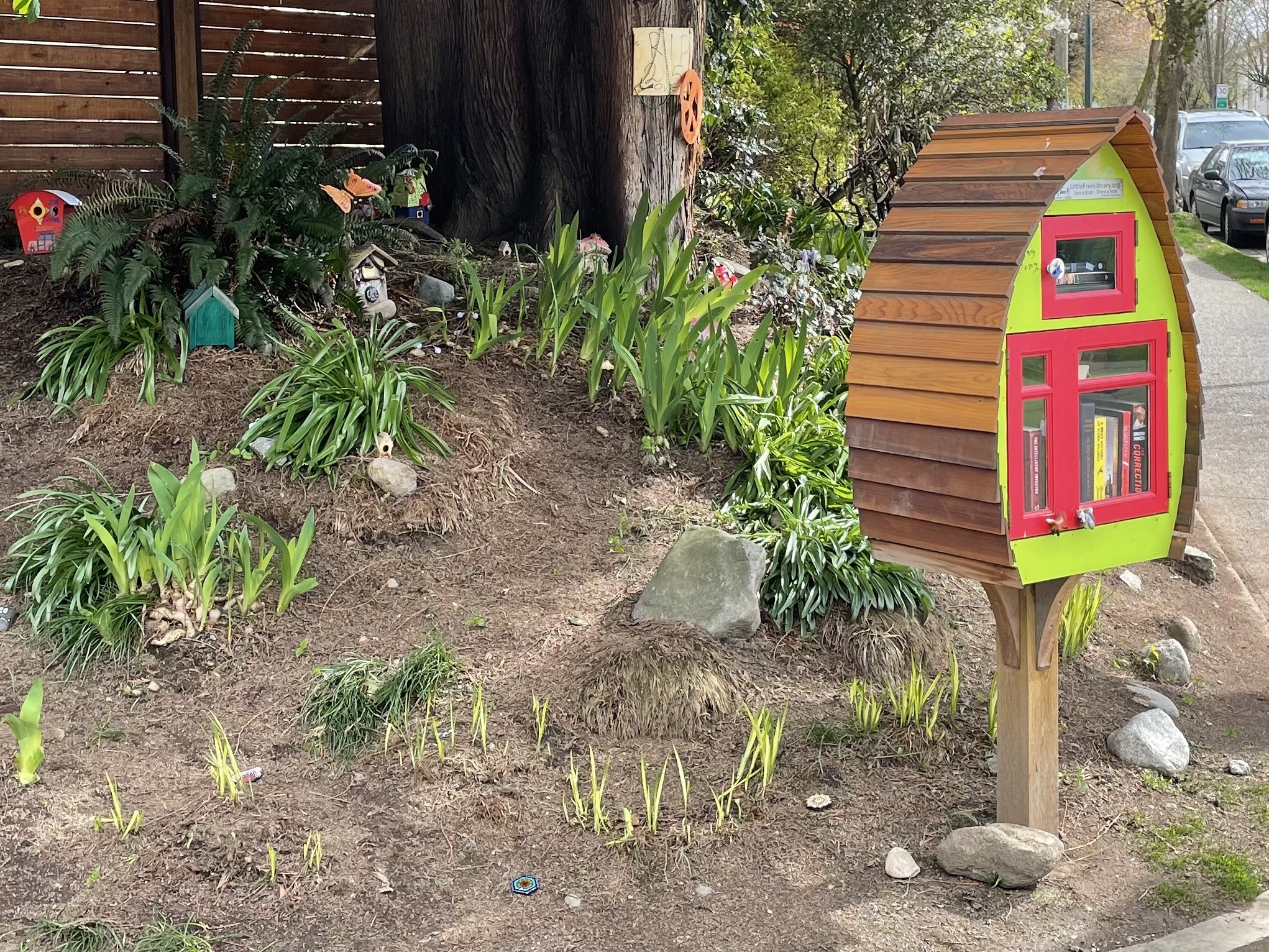 The Story of Warren’s Little Library and the Fairy Village

I am sending you our project story almost a year after the project began because the story never seems to end! Our project continues to evolve and we have been so happy to see contributions from our neighbours continue. We have plans for some changes and a new addition soon, too. In the meantime, here is our story.

The Story of Warren’s Little Library and the Fairy Village

My name is Tanya Bennett and I am reporting on a Neighbourhood Small Grant project on behalf of myself, my neighbours Kathy and Mike, and my two children Lucy and JoJo. Thanks to the Neighbourhood Small Grants program, my children Lucy and JoJo helped build a little library with our neighbours Mike and Kathy and then they helped me set up a fairy village around it. Construction of the little library began in May 2021: design by Mike and colours by Kathy. JoJo helped construct the roof and Kathy and Lucy made the footpath and steps up to the yellow cedar tree. Named “Warren’s Little Library” after the most famous character on the block, Warren the Cat (shown in photos). By the end of May, the library was active and the fairy village was set up – we named it Fairy Land. Our fairy houses were repurposed bird houses, a tin lunch box and other ceramic, wooden or metal treasures thrifted, donated or salvaged (no plastic).

In June, an orange sign reading RIP 215 and a flower garland appeared overnight on what could be the tallest and oldest yellow cedar in our neighbourhood, just a few days after the announcement of discovery of the remains of 215 children at the site of a Residential School in Kamloops. 🧡

Kathy, Lucy and JoJo added many painted rocks to Fairy Land during Summer and the community was invited to leave a rock and make a wish. In early July we had some excitement when some ponies moved into the fairy village, along with a barn and stables. Only a few hours later, Ponyzilla showed up and galloped through the fairy village! No ponies were harmed in the attack and, just as mysteriously as she appeared, Ponyzilla disappeared (we suspected a certain toddler and her parents instigated these shenanigans). That month, Warren’s little library received its official signage and a spot on the map as a member of littlefreelibrary.org. Then, our sweet little library was given doors! Built & glazed by our talented neighbour, and Warren’s cat daddy, Mike.

In October, Fairy Land and the trees get spooky for Halloween. In November, we added some new colourful lights to the Fairy Village and 3 new houses were relocated from my mom’s back garden in South Surrey. She passed away in July and I love to have them nearby. Someone also refreshed the orange memorial 🧡.

A new house popped up unexpectedly just before New Year’s Eve. We also added a new string of lights.

Warren’s Little Library continues to be very busy in 2022, we are always surprised how the inventory changes – it can be completely empty and then full and then empty again in just one day. Fairy Land also continues to change. Most recently, someone left several small painted tiles. I also found a sweet little ceramic bird hiding between the new Spring shoots today while returning a house that Lucy had repaired and painted to the village. Kathy deserves special recognition for all of the weeding and gardening she has done on that corner and a big thank you to Mike for adding some irrigation hoses and a timer so the corner is looking more green.

Our little library continues to draw visitors and this tiny pocket of East Van, under the shade of the tall cedar, feels magical to me. It is wonderful to see children (and adults) visiting Fairy Land. The fairy village and Warren’s Little Library have started many conversations between neighbours and have encouraged interaction during a time when the pandemic made everyone more isolated than normal.

For more photos of this project and the most recent updates, please visit the online photo album at: https://www.fairydoorsofvancouver.com/fairy-village.html