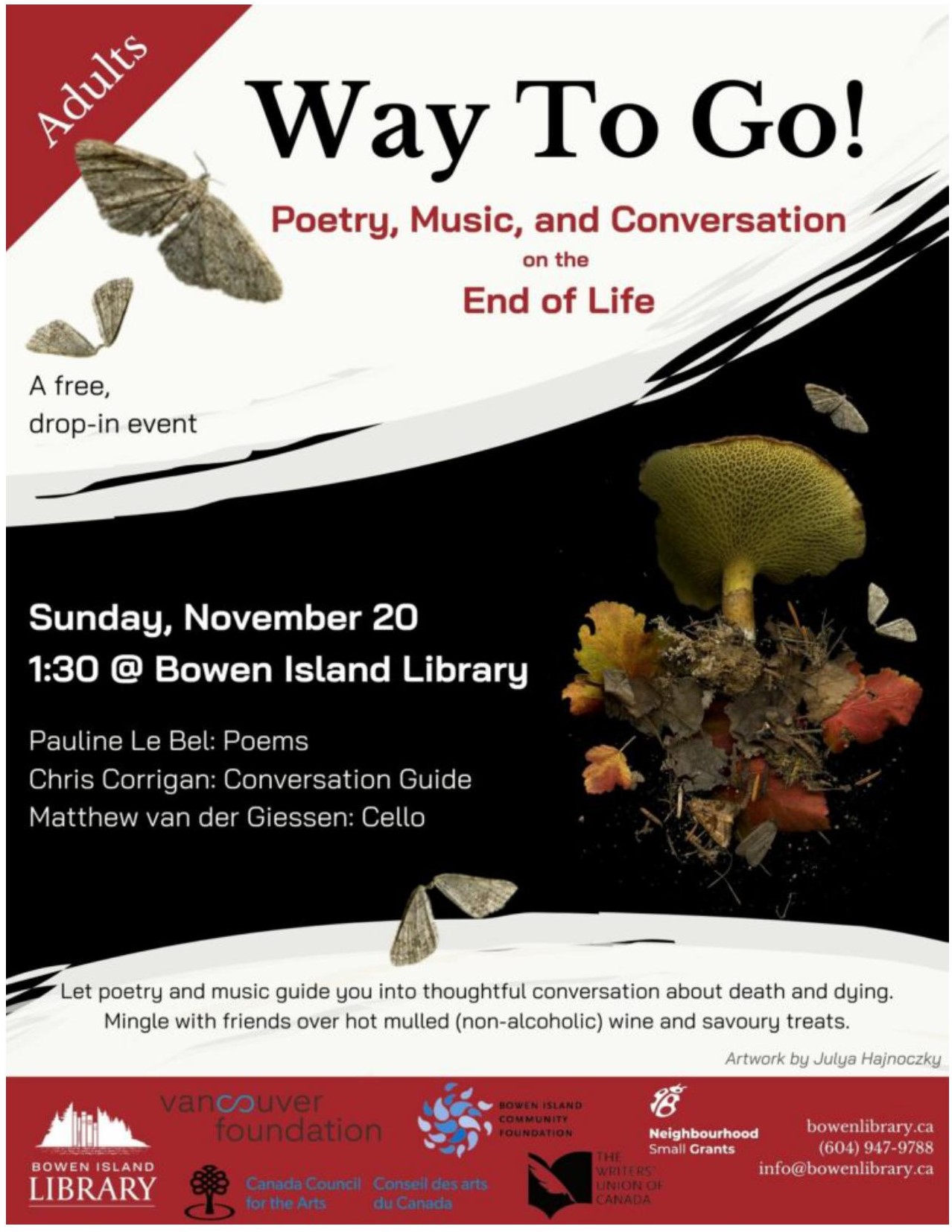 Way to Go! Poetry, Music & Conversation on the End of Life

What would it be like to allow the topic of death to enter the room and be acknowledged? Could we chat with open hearts and minds about our fears and hopes? Could we act as people who are all going to die and have one chance to do it? We give much attention to birth, such a blessed event. Death — also a sacred time — deserves as much attention.

On a Sunday afternoon in November, over forty brave folks showed up to give death some serious attention — not only elders, but middle-aged and young people too. As they entered the library, they were welcomed by the soulful cello playing of Matthew van der Giessen. They were greeted in song by Pauline Le Bel, who also read her poems on the end of life — poignant, and at times, lighthearted.

Chris Corrigan then guided the deep conversation, asking questions that arose from the themes of Pauline’s poems: “how would you talk about your own death?” and “what kind of ancestor would you like to be?” Participants went into small groups to facilitate intimate conversation. There was an audible, enthusiastic buzz in the room, created by people who had clearly wanted to talk about death but were silenced by our culture’s taboo. Strangers willingly shared their thoughts about their own death and those of their loved ones.

Then we celebrated with hot mulled non-alcoholic wine (brewed by Pauline and Rabia) and savoury goodies made by Bowen Bites: small triangles of spanakopita, cheese straws and rosemary shortbread — all delicious. And as we nourished our bodies, the conversation continued. Some would have stayed longer, but the library was closing.

The motivation for this event began many years ago when I was caring for my older sister who was diagnosed with a terminal illness. It was a precious, soulful time, which deepened our bond of love and helped me to transform my beliefs about the end of life. After she died, I wrote poems and songs, some of which played a part in Way to Go!

The response to Way to Go! was beyond my wildest dreams. Next day, my email box was full of praise for the event, and requests to do it again. Two Letters to the Editor appeared in the Undercurrent from people grateful for their experience.

Many thanks to Bowen Island Community Foundation and Vancouver Foundation for funding Way to Go!
{Post Image:11}