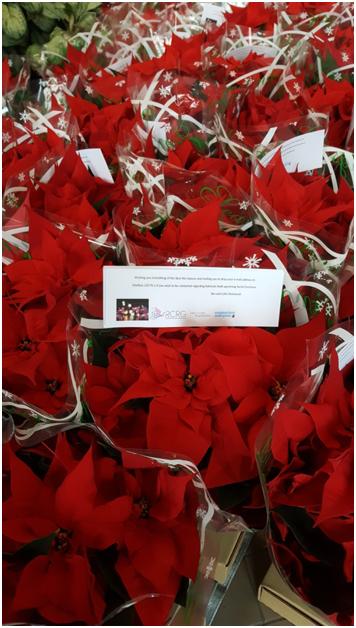 You Are the Light

My neighbourhood is a large complex with over 130 units and a number of seniors in their eighties and nineties. In the fall, I noticed I was seeing fewer people on the grounds and began to be concerned about loneliness and isolation among the residents during this pandemic.

Fortunately, I discovered that I could still apply for a Responsive Neighbourhood Small Grant and I latched on to the idea of providing small care packages for residents since some lived alone, were disabled, and/or had few family and friends around.

I knew by mid-November that I had received the grant but the actual cheque did not arrive till we were back in lockdown. With that, I was reluctant to shop around for the goodies and I was beginning to feel time pressure as my planned project deadline was early December. After some thought, we came up with the idea of gifting poinsettias. We called around to a few local florists, big box stores, and finally Grootendorst Nursery, who offered us a great price in support of the project.

My original aim was to reach around 50 people, but I was able to buy around 75 plants. We placed these in the entrance halls along with a number of wrapped chocolates. We are all masked and stringently respect social distancing inside the buildings at all times, so we let people help themselves as they passed by throughout the day.

Everyone was appreciative of the generosity. The highlight for me was seeing people thinking of the less fortunate among us and even going so far as to offer to give someone their plant if we ran out. I also had a number of calls from neighbours offering to take flowers to those who were less mobile or in need of cheering up.

The icing on top was that Grootendorst Nursery delivered these beautiful plants and was kind enough to offer us free delivery! We were so happy to be able to support this family-owned and operated business located in our community.

I included a note with each plant wishing people the best. I also asked people to drop their email address in my mailbox with the idea of starting a Social Committee to plan similar events in the future!

So far, I have had a number of responses, as well as many, thank you notes. Giving plants was even better than the gift baskets would have been. Thank you for the support of RCRG and Neighbourhood Small Grants!
{Post Image:11}