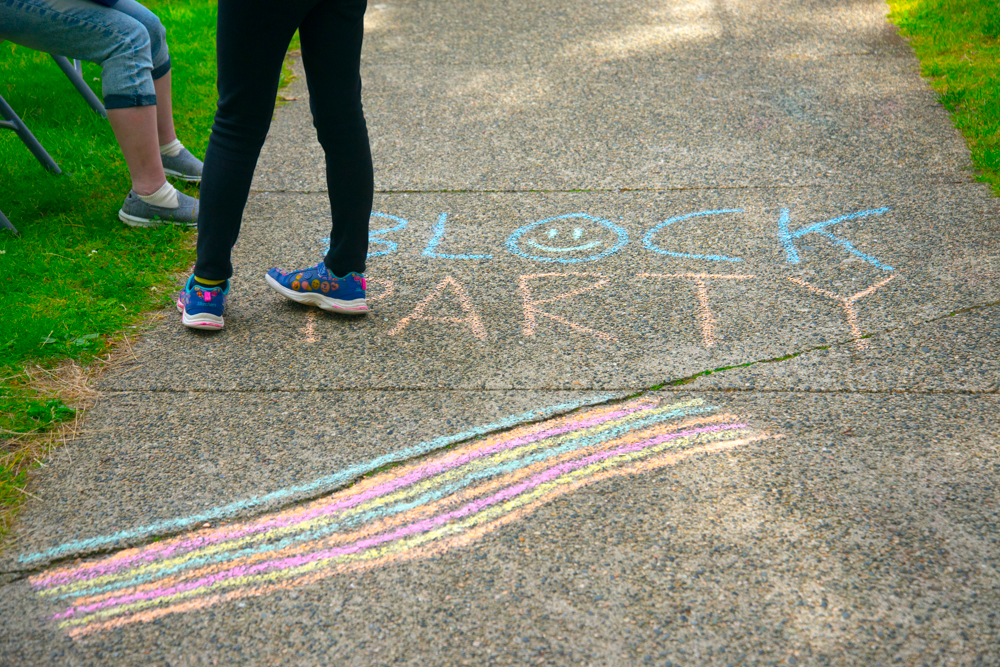 Stories from a Block Party

On June 17, 2018, we had a very successful neighbourhood block party to mingle and get to know our neighbours. We were able to put on a stress free event with a strong team of seven core volunteers and a whole lot of love and dedication. It’s amazing how a small group of like minded people can succeed when they put their minds to it, and we did just that.

The event had around 100 attendees from all walks of life who came by with lots of conversations, potluck contributions, and loads of gratitude. For our write up we thought to include some stories that we collected from the day of and reflections after.

I realized that the event wasn’t for me. It was for all the people living in the neighbourhood who needed to feel a sense of community.

A story from Margaret, daughter of Isabell, an older woman who’s lived in her house on Columbia Street since the 1930s. Margaret remembers as a little girl, playing in the window wells of the church (Good Shepherd) that borders her childhood home. While sitting down painting rocks at the craft table, she reminisced on how the window wells would get increasingly more ‘scary’ as the depths increased, making it more difficult to jump out when balls or other toys would get stuck behind the iron railings. She chuckled, watching her two kids retrieve ping pong balls from those same small window wells a whole generation later.

Dean, a passerby on bicycle decided to stop by and take part in the event. Dean shared that he had travelled through the night from New Westminster by bike, and that he was sure he could never go back. Dean said he was tired and hungry and unsure where he would go tonight. He commented on how this neighbourhood held a different energy from what he was used to, and that it felt safe and was the kind of place he’d like to settle into. Over some shared food and conversation, it was brought up that 3 shelters existed in the very close vicinity.  Directions were drawn, and Dean left with a smile, full belly, and what seemed like a sense of hope.

Sara, came to the block party because she heard the live music playing. She is an indigenous woman who moved to the neighbourhood back in March. Sara said she found the neighbourhood not very welcoming so far, but that today helped to change that. Sara was proud to share she had been sober for 2 years, and felt like there should be more people gathering together in this way, that doesn’t involve alcohol or drugs. Sara stayed till the very end, giving out hugs of thanks to those as she left.

“I moved to Vancouver a couple years ago from Bellingham where I was an active member of my community with a fulfilling and substantial social group. It’s been quite an adjustment moving to a big city where it can be easy to feel isolated socially speaking.

This block party was game changer for me and I haven’t felt this connected to my community since I moved here. At the event I met tons of my neighbours and made some friends in my co-organizers.

I also appreciated meeting some members of the local churches around the neighbourhood. Although I don’t have any interest in any type of religion, I think it’s really important for perspective and community building to interact with people who have different beliefs than you. I definitely don’t believe in God but I have a ton of faith in people and this event reinforced those beliefs immensely!”

Words from another volunteer Meaghan, “I had a really great time being part of this community event and I am very grateful. Overseeing the Rock painting table was a pleasure and it was busy. It was great to see community members of various ages stop and paint a rock or many and in so many different ways/designs. What I also really liked is that because you did stop and sit to paint, it allowed for a lot of engagement with getting to know each other. Comments were made about how this was the first community block party they had experienced and they are hoping we do it again. I feel the same way. “

An Email from Simon

We also got this email from someone who lived in the neighbourhood afterwards:

I live on the corner of Alberta and 10th. I saw the poster on our building for the block party. Unfortunately, I wasn’t able to make it, but I just wanted to let you know that I was very happy to see that someone was organizing one. A few other tenants in my building also thought it was a good idea.If you end up doing it again, please let me know if I can help.

We had a lot of support from our neighbouring church The Church of the Good Shepherd, who provided us with tables, chairs, cutlery, washing facilities, and even a ping pong table. A number of their congregation came out to enjoy the day as well as volunteer to help the day run smoothly. Pastor Allan especially was a great asset to our event by securing the donations through the church for the day as well as partaking in the community event with the rest of us.

It wasn’t until the block party was finished that I realized that the event wasn’t for me. It was for all the people living in the neighbourhood who needed to feel a sense of community. Who craved connection, who wanted to see something like this in their neighbourhood. After getting so much positive feedback from my neighbours I realized that the event was bigger than we could have imagined.

Bigger than our team of volunteers, bigger than me and my idea and bigger than one event can express. It was something that we could take into our day to day and feel grateful to hold memories of our community and recognize familiar faces on a daily basis. This is the true purpose of the event that my little idea had helped create and I am beyond amazed by what it and a lot of hard work by many had created. I can’t wait to start planning the next one.

Thank you to the Neighbourhood Small Grants for giving us the opportunity and funds to put on an amazing event in our neighbourhood.

News and announcements about the Neighbourhood Small Grants program. Updated by staff at Vancouver Foundation and network partners.