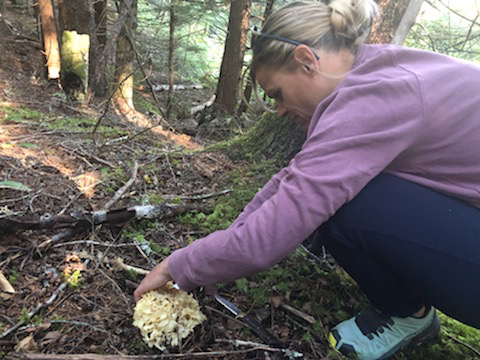 My event, “Foraging 101”, went very well. The first part was fiddle head picking. We went on May 26, which was a little later then normal due to scheduling conflicts with participants. Unfortunately we missed the main picking season, but I was able to teach the ladies what to look for and how to tell the difference between the yummy ones and the ones that make you sick. Each participant was able to find about a half a dozen fiddle heads each. I added some that I picked from last year and we cooked them up as a group and enjoyed them together. The area we were in had a lot of devil’s club, so we were able to pick some Devil’s club buds as well. I explained to the participants how these were an excellent source of vitamin C and can be added to salads for a real pop of flavour. There were five participants.

The second part of my event was berry picking. The Saskatoon berries this year in Terrace were amazing. On July 26 we went berry picking right in town on Keith Ave. We were able to pick two ice cream buckets in a half an hour. We vacuum packaged them for making pies this winter. There were three participants.

The third part of my event was mushroom picking. On September 20, we went in mushroom picking in the evening. We were able to find Chanterelle, Hedgehog, Lobster, Swollen Stalked Cat, Pine, and Cauliflower mushrooms. We washed them up and made a delicious cream of mushroom soup that we served to all the participants and their families. There were six participants and about 20 tasters!

Now, our little group is constantly sharing pictures of mushrooms with each other. We have not been able to get back out together again, but each of us has managed to sneak out on our own for an hour of two of foraging. One of the participants went out with some of her friends that were non mushroom pickers and shared her knowledge with them. Now they are part of our sharing group too. We have already committed to starting the fiddle head picking season earlier next year! 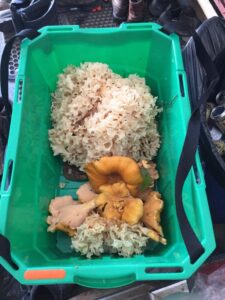