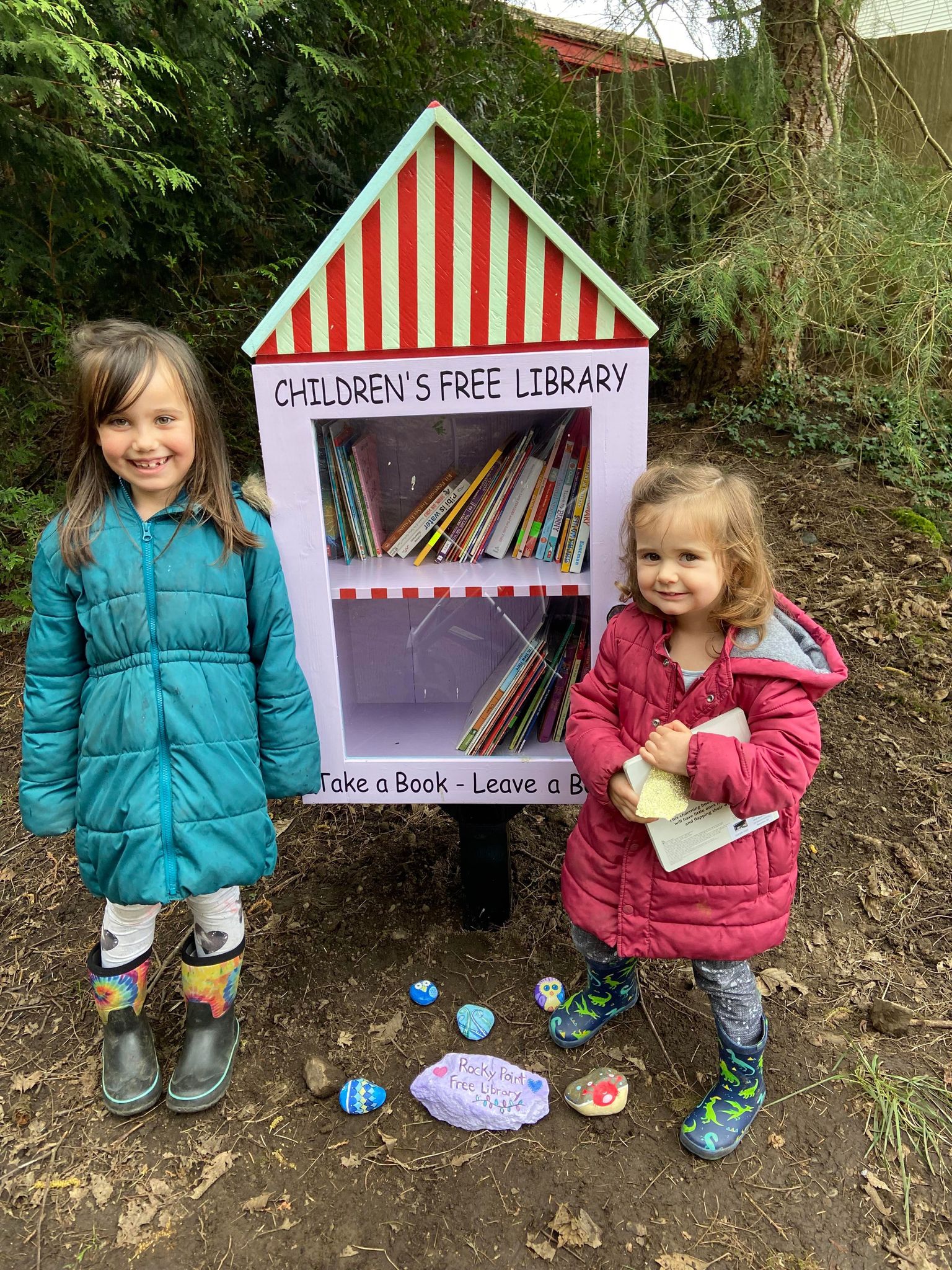 This project has been a really rewarding experience for me, and I am so grateful for the grant money received to make this happen, so first of all, thank you very much to the Neighbourhood Small Grants team!

We moved to our new neighbourhood in North Nanaimo in September of this year and really wanted to contribute something positive to bring our new community together, particularly the children. The houses are a bit more spread out than we are used to, which isn’t conducive to socialization. However, there is a lovely trail connecting the neighbourhood to the school, which I thought would be a great place to put our Children’s Little Free Library and bring more of the kids out and about to connect with one another.

First, I had to find a local woodworker to build the library, which took a bit of Facebook research, but I eventually did find someone willing to take on the project, A & M Just Craftin’. I asked them to design the library in such a way that children’s books of all sizes could fit. I also wanted it to be short enough for the children to access the books themselves. The building part ate up a large portion of my $500 budget ($280).

Then, I contacted a lady who refinishes jewelry boxes and asked her if she would be willing to paint the library. Peggy of Love2Renew kindly accepted and spent many volunteer hours beautifying our library. She did an amazing job and even replaced our door knob with a pretty floral one! This part of the project took a bit more time, as Peggy didn’t have a covered outdoor space to seal the library after it was painted, so we were reliant on the cooperation of the weather. I reimbursed her $100 for the painting supplies.

One hiccup that I encountered in the project was getting city approval to install the library on the trail. It took about three months for me to finally get the library’s location approved. Thankfully, the city did come through in the end and even installed the library for us.

For this grant, my intention was to fill the library with diversity and inclusion themed books. I sought out donations from local moms on various Facebook groups and sent donation letters to two local bookstores. I was able to get a number of books donated to fill the library, though not as many as I had hoped were diversity themed. It turns out that it’s a lot harder to find donations of those types of books than I thought, but we did get 10-15 books fitting in that category.

The final part of my project was a diversity/inclusion themed StoryWalk, leading through the trail to the library. The book I chose for the StoryWalk is called Be Kind. This part of the project was a lot more challenging than I anticipated. To follow the copyright requirements for StoryWalk projects, I had to purchase two copies of the book Be Kind and dissect it. Then, I picked up some wooden posts from Home Depot, and I got the pages of the book laminated at Staples. Due to budget restraints, I was not able to get as thick of lamination as I had hoped, so the pages were not as stiff as I would have liked. Also, ideally, I would have bought velcro to attach the pages to the posts, but there was no budget for this, so I had to use nails.

Due to the weather and city approval related delays in the project, the StoryWalk has not yet been installed, but I am hopeful to be able to get it up and running next weekend.

Since the library went up, we’ve noticed new books coming and going every day, so it’s definitely getting great use from the local kids. Also many people have commented to me about how wonderful the new library is while walking by. It’s really brightened up our trail and given our family a new reason to get out and about in our community. My next step, if I can get the budget, will be to install a bench and possibly some planters around it, so that families can stop there and look at the books in the tranquility of the forest.