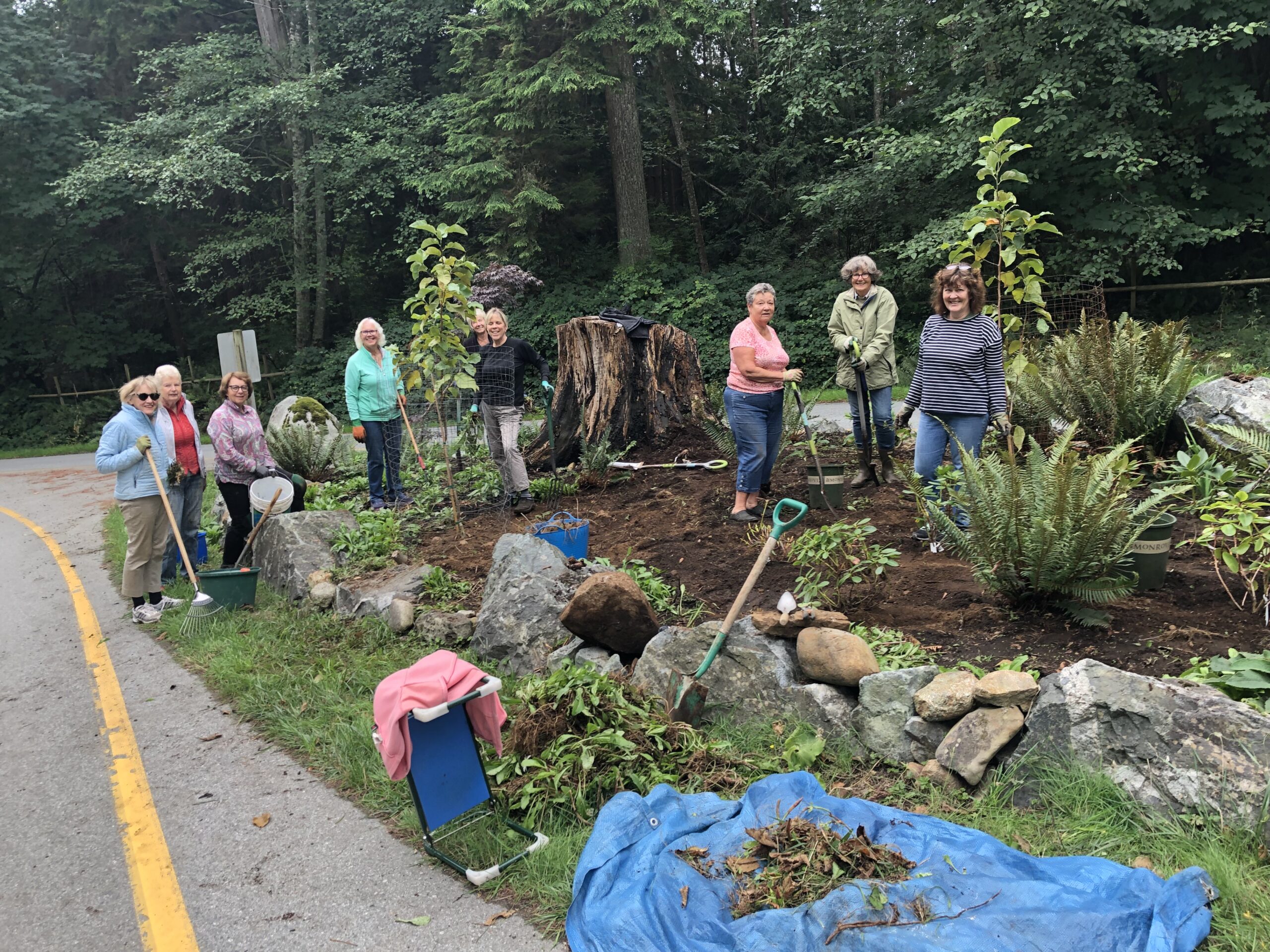 HISTORY: This project was initiated by an ad hoc group of gardeners wanting to see improvements to a garden at the south end of Cowan Point Drive. The garden was originally created in 2003 when the road was bisected to save a large maple (eventually cut down for safety reasons). Today, besides the stump, there’s a small maple, a distressed dogwood & several small rhododendrons which are dwarfed by thistles & buttercups.

Our project application, “Bruces’ Garden” Project recognizes two individuals in the community who have worked to maintain this area. After consultation with them, we submitted an application to NSG, to purchase additional trees, plants & soil so that we (with a larger volunteer group) could improve the health of the garden & beautify this large publicly-viewed space. This garden is central to the Cowan Point community & will also be enjoyed by the many other Bowen residents who travel this road en route to 2 public beaches, Bowen Island Golf course & a nearby walking trail.

PROJECT IMPLEMENTATION: Twelve volunteers were involved, including Kathy Leishman, who volunteered her landscape & gardening skills. Half the volunteers lived in the immediate area, others travelled from other parts of the island; all had an interest in an outdoor activity & participating in a planting project which could be a fun & creative learning experience.

Our application was approved in May but because of dryer & hotter than usual weather in June/July we requested a delayed start. In August, weeding & clearing began. In September, new trees were purchased/planted & in October additional plants, grasses & bulbs were added. In addition to the first assessment of the garden & the purchasing & transporting of plants, there were 5 working sessions of at least 2 hours. The garden received over 100 hours of dedicated attention and $500 of new plant material.

BENEFITS: As with any undertaking & particularly gardening, results aren’t always immediately apparent. We’ve had positive feedback but hopefully spring will showcase a healthier & more colorful garden. More immediate is the interest from the community: those who drove or walked by the garden & offered verbal support, or expressed interest in involvement in new projects.

Last & most importantly are the benefits acknowledged by the volunteers themselves. This was a safe outdoor activity in a stressful covid time. We learned new gardening skills. We shared tools, stories & books. We heavy-lifted together & we became good friends! After our “final touches” planting on Oct. 18, we celebrated as a group and recognized our leader Kathy and the importance of each other. Volunteer commitment and interest in further community projects has been ignited and … “Bruces’ Garden” will be weeded in the spring.
{Post Image:11}