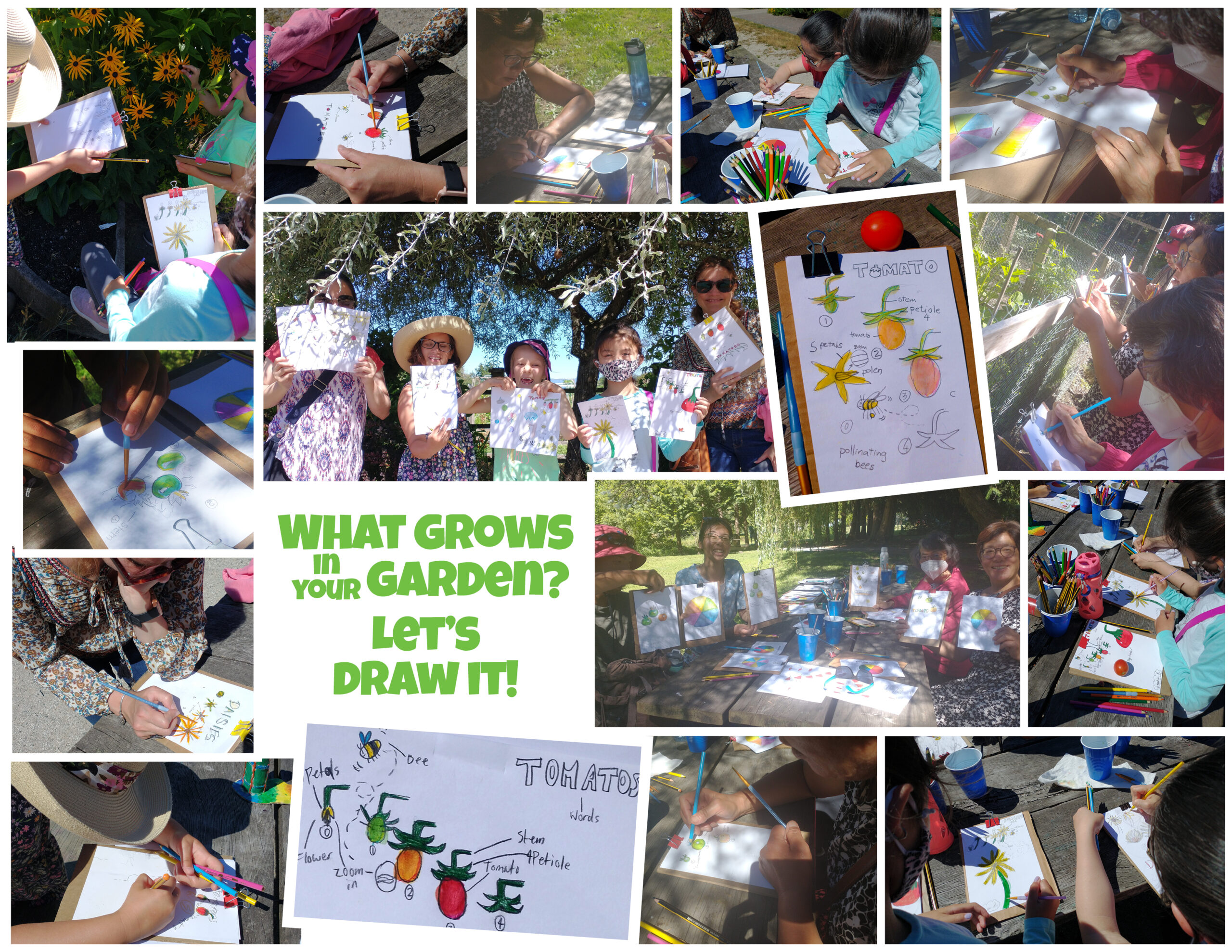 What grows in your garden? Let’s draw it!

A community garden is the perfect place to learn and draw colourful veggies and flowers, in the company of friends and family. In addition, being outdoors surrounded by nature has a positive impact in mental health. For these reasons, science illustrator and educator Bea organized several nature drawing workshops at Terra Nova Community Garden and Paulik Community Garden.

These free workshops were advertised at the Urban Bounty Newsletter and quickly “sold out”. The website Eventbrite allowed the instructor to communicate with the participants, which was particularly useful during the high temperatures. Location was changed for the second day to Paulik Community Garden, to benefit from the natural shade and picnic tables.

The level of energy and enthusiasm, as well as the openness to learn and draw was palpable, among all participants of all ages. The workshops started with a brief introduction, followed by a colour wheel exercise, in which participants were invited to explore mixing the three primary colours (cyan blue, yellow and magenta). After this exercise, participants took pencils and paper on a carboard with a clip to the community garden plots and found a tomato plant. From a distance and without trespassing the garden plot, they observed, described, and drew at least 3 stages of the tomato plant, making notes on changes of shape, colour, and any other things that they noticed and wondered about. A participant found the tomatoes so yummy that she decided to add a few extra steps of what she would do with them in the kitchen, which resulted in a beautifully illustrated recipe. Other participants drew a flower as step 1, with bees around it. After that, they all returned to the table to add colours, labels, and other details, to their illustrations. (A note regarding affordable materials: Water-soluble colour pencils are an incredible inexpensive wonderful media for all ages. They can be mixed with fingers or brushes and easily cleaned afterwards, and the mixing is fun, and the results are stunning! A paper at least 128 gr is an affordable and inexpensive paper thick enough to handle water-soluble colour pencils).

In a couple of groups, there was time to go back once more to the garden, this time to sketch a flower on location, describing at least 3 stages of the flower, and the changes in shape, colour, and other noticeable details. As always, participants were mindful of not trespassing any community garden plot and observe the flowers (and the beautiful and hard-working bees) without altering them.

At the end of the workshop, instructor Bea reminded participants to add to their scientific illustrations a title, labels, at least 3 steps with numbers, some zoomed in details, as well as any personal notes on things they noticed or wondered about. And most importantly, their signature.

This was a great introduction to science illustration. We worked on transferrable skills, like observation, comparison, asking questions, making hypothesis, and explaining a natural occurrence. We used pictures, numbers, and words, and learned about colours. And families and friends were able to create fond memories of drawing together outdoors. What can be better than that?