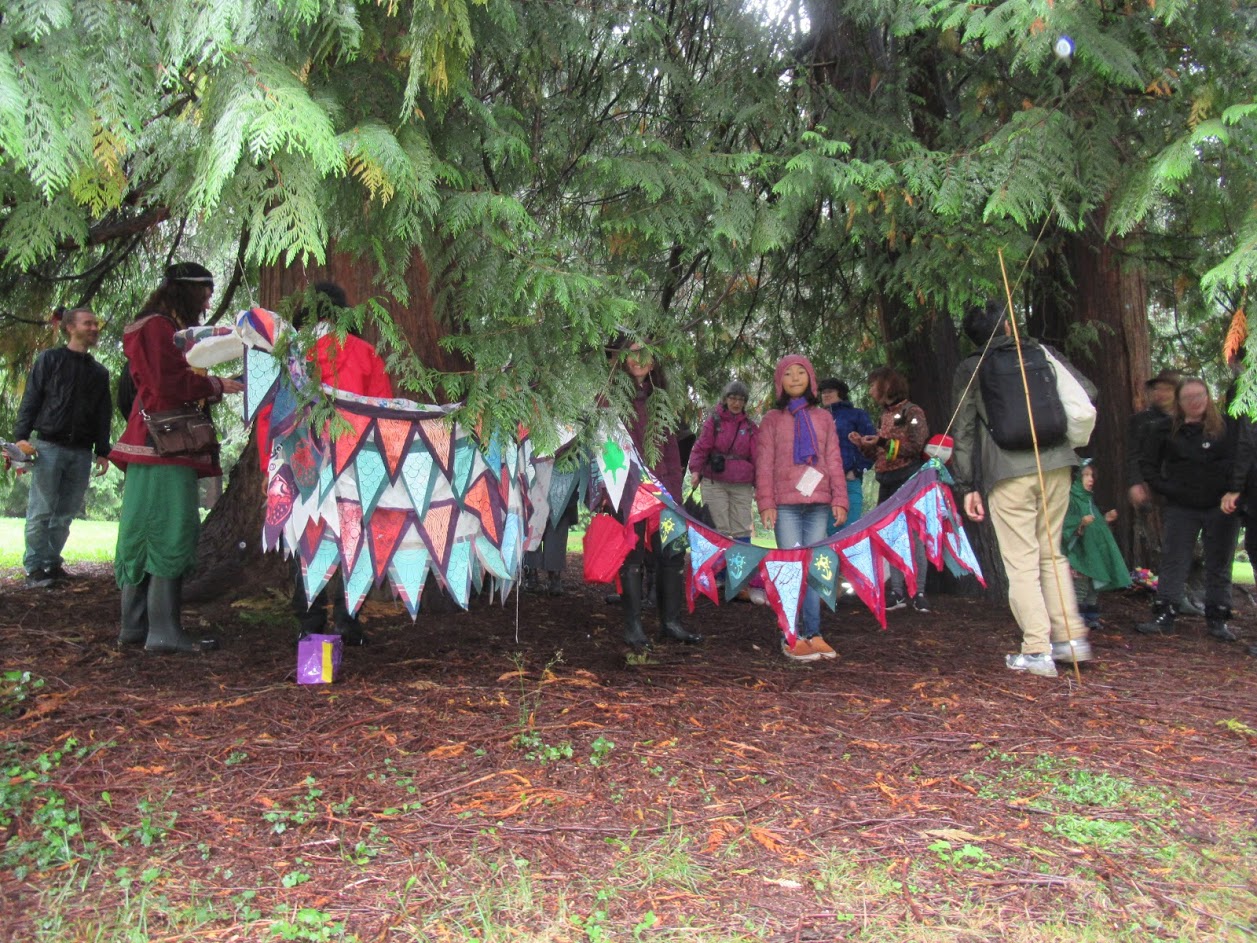 Recognizing the need to create meaningful relationships with where we live, Dragon Walk included 6 community engagement activities (detailed below), culminating in a parade.

Thank you to Neighbourhood Small Grants for helping make this project happen.

These gatherings were an opportunity to engage the community in a joyous celebration of the ecological diversity found in the Riley Park Neighbourhood. The project was inspired by a personal relationship with the land and cultural knowledge gained in mentorship.
Conceived as a pilot project with a goal to address social isolation in multi-unit dwellings, the parade was highly visible to the first condo-inhabitants of the Cambie Corridor and embraced this precious section of The Boulevard, Vancouver’s only Heritage Designated landscape and Parks Board arboretum.

DRAGON WALK programming and parade increased awareness of history, ecology, and indigenous protocols, public realm spaces, amenities, and opportunities. This led to meaningful inter-cultural and intergenerational relationship building with and within collective spaces.

All events were free and accessible.

2. Dragon Scale making x2 (August 19, September 7): Silk-screen workshops were facilitated by Hazel Bell-Koski in Riley Park during Community Garden work parties and at Hillcrest Community Centre. Participants were invited to reflect on their sense of home, place, belonging, and indigeneity by creating stencils or painting onto triangles of fabric. These were stitched together into a large dragon puppet and used for the parade and dance./

3. Interpretive walks x2 (August 25, September 10): Guided by artists and place-based educators these walks highlighted indigenous knowledge and ecological history.
Senaqwila Wyss is from the Sḵwx̱ wú7mesh Úxwumixw (Squamish Nation), Tsimshian, Sto:lo, Hawaiian and Swiss. She is an ethnobotanist carrying on the tradition as transmitted by her mother Cease Wyss, and shares Coast Salish plant knowledge related to their many uses.

4. Storytelling evening (September 5): Why dragon stories? Dragons are cool because: they capture the imagination; they evoke ancient and humbling geological processes such as volcanoes; they are pan-cultural. In this way the performance of story became a doorway to environmental and intercultural learning and celebration.

Wendy Charbonneau (Squamish Elder) shared the story of Sínulhka, a massive two-headed serpent that, according to local folklore once roamed up and down the coast and Xwechtáal, a brave young hero. She also led the audience in a dance
Naomi Steinberg told a story from her Jewish heritage that tells of a dragon flying over the mountains of Kurdistan.

5. Parade (September 22) gathered in the back alley behind 4361 Cambie to wind up the back alleys crossing the Cambie Heritage Boulevard using the 29th Ave. bike-path lights, and then onto the N/W entrance of Queen Elizabeth park. Here the community circle dance will occur.

By bringing awareness to geological history and Coast Salish history, while inviting acknowledgement and celebration of place,