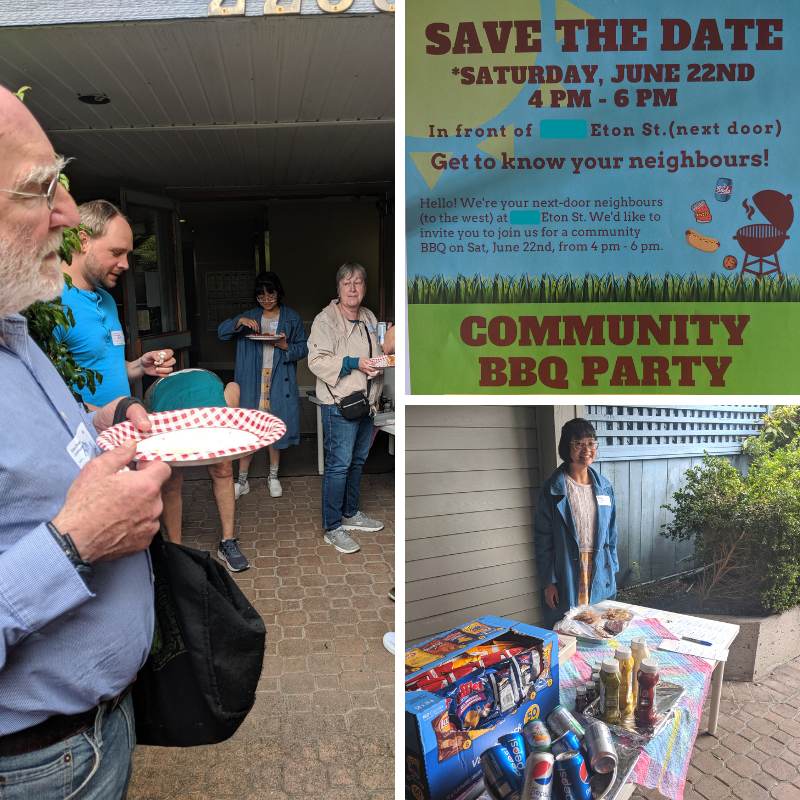 Our goal for the Eton Street Community BBQ was to bring together folks from our neighbourhood to foster a sense of community & belonging in our area. It’s hard to get to know each other when, a lot of the time, the only time you see one another is a quick hello on the street or in the hallway. We felt that a community bbq would create the space to get to know each other better in a fun, comfortable & relaxed environment.
In the weeks prior to the bbq we put up posters & went door to door in our buildings to hand out personal invitations to each person. We recruited neighbours to help with lending a bbq, handing out nametags at the event, letting us borrow their fridge space, and overseeing the drinks & snacks table. The nametags that we created had a fun icebreaker where each person wrote down the first letter of the city they were born in and others got to guess the name of the city. It was a great conversation starter!
On the day of the bbq we had an excellent turnout, and if there were any folks passing by on the street we invited them to join us! A lady from our building was one of the first people to attend; she is in her 80s and because of her physical health she rarely leaves her apartment. She was thrilled to be there & stayed for the entire event! Many of the folks that attended made comments like “This is great – this doesn’t happen in Vancouver” and “Let’s do this again next year”.
A couple of folks from the neighbourhood who were chatting with each other realized that they knew the same person who works at the University of Regina – there’s a coincidence!
The end result of this community event, which only took place for a few hours, was that everyone who attended the event left with a sense of community that they didn’t have before. Folks knew each others’ names, and in many cases where they grew up and how they ended up living in our neighbourhood. We shared food, stories and fun and now can greet by name so many more people than before this event occurred.