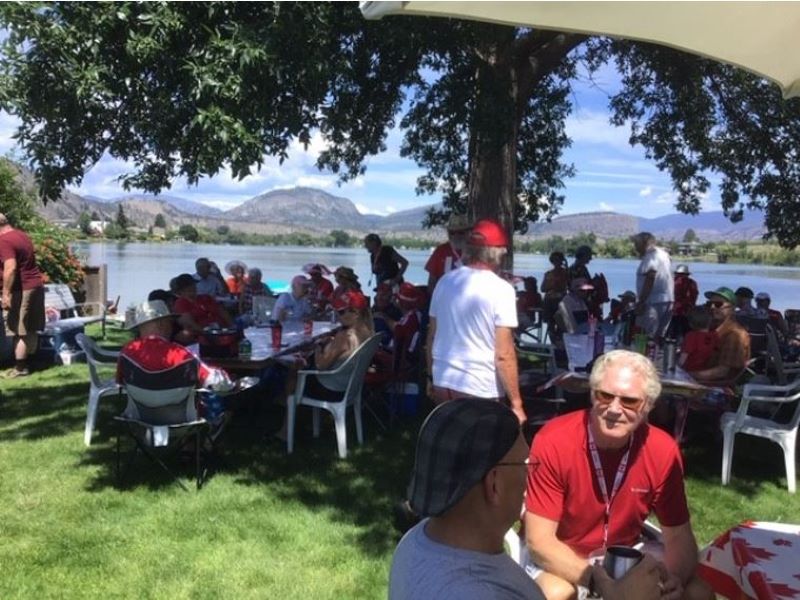 Meetings Neighbours and Celebrating Together

We had a fabulous neighbourhood picnic on July 1st.  There were about 75 out, including friends of the neighbours.  We shared a lovely barbecue on the lake here and there was next to no wind.  We had name tags for all our guests, we made introductions, and spoke about the neighbourhood small grants and how it is funded.  There were smiles on everyone’s faces.
We advertised well and visited many of the homes to encourage participation.  There are 53 units in our park and many were involved.  Our goal was to encourage everyone to come, invite a friend and bring something to share.  The burgers, buns, fixings, cutlery and plates were provided, as well as a huge Canada Day slab cake.  Pop and water, as well as snacks of bags of chips, etc.; were also provided.  We sang “O Canada” and had a Canada Day quiz, along with a number of small Canada Day prizes.  We offered games after the picnic and many stayed way beyond the three hours we planned for the event.  We had a number of new residents who pitched right in with the set-up and barbecue.  There were plenty of volunteers.  I would recommend that a project leader have a team to work out the details of food, set-up and clean-up.  We ordered two large canopies to cover our food and protect from the heat.  We covered that cost from our park funds.
I would say it was a great success and we got quite a few positive remarks from our Facebook pictures of that day.  Our team worked well together and there was a lot of laughter.  The participants enjoyed the great food and our quiz, which they worked on in small teams- another opportunity to work together.
We learned that the beach site was preferred as it gave a beautiful setting of the lake behind us.  It meant we were in a closer space which worked well.  We have a larger green space but it lacks shade and is very boring.
We also learned that, with the extra help financially, we could have a really fabulous celebration!  We invested in name tags as a way to recognize neighbours and open up further conversation when we see each other on the street.  Some residents have been in the park less than two months and they mingled well and got to meet people they otherwise wouldn’t have met.
Thanks for including us in the neighbourhood small grant.